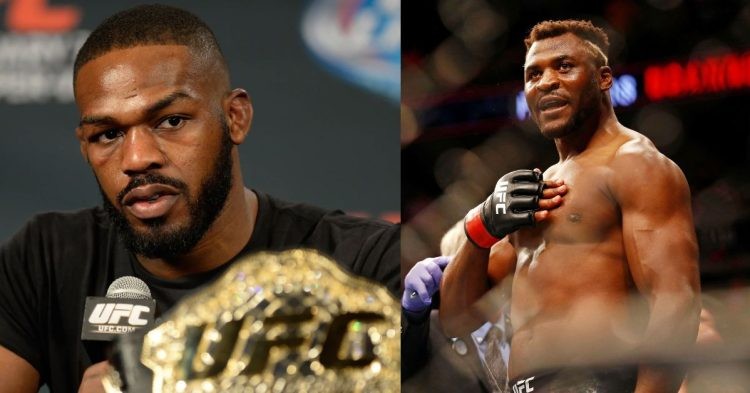 Francis Ngannou vs Jon Jones is yet another MMA dream match that slipped out of the UFC’s hands. Jon Jones made it clear 3 years ago that he wanted to move up to heavyweight. But the match was never booked due to contract negotiations between Francis Ngannou and the UFC stalling. In January 2023, the T-Mobile Arena blunder, however, extinguished the possibility of this fight happening.

Dana White announced that the leaked poster was real and Jon Jones will fight Ciryl Gane for the vacant HW title. White also told the media that heavyweight champion Francis Ngannou was now a free agent and had been released from his UFC contract.

Despite not commenting initially, Jon Jones has now addressed Ngannou’s departure. “I’m happy for Francis. I’m glad Francis knows his worth…I was in a very similar situation as Francis as a light heavyweight…I had to sit out three years, and I missed a lot of time, but now we’re here.” said Jones.

He continued, “I encourage Francis on his journey, and I wish him all the best. Another company is going to be truly blessed to have him.” Jones seems to think very highly of Ngannou for not selling out. And it seems like Bones truly respects The Predator.

Francis Ngannou reveals his contract demands to the UFC

Former UFC heavyweight champion Francis Ngannou spoke about his release and status as a free agent on the MMA Hour with Ariel Helwani. Fans had been waiting desperately for Ngannou to address his UFC departure after his cryptic Instagram post on MLK Day. The Predator said, “I have balance in my life. I’m doing very good. Don’t you worry about me.”

The 36-year-old heavyweight also addressed Dana White saying Ngannou wanted to fight lesser competition. He attributed the comments to frustration caused by one of his demands. Ngannou said he tried to get a three-fight deal. And those fights would be a trilogy bout against Miocic and two fights with Jon Jones. The Predator also said that he was offered some amount close to Lesnar’s paycheck for UFC 200.