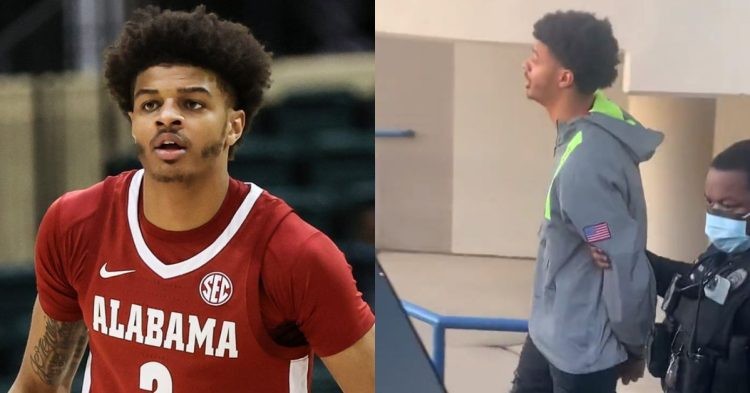 Darius Miles, a basketball player who had been playing for the University of Alabama was arrested recently. He is charged with capital murder along with another man, involving a 23-year-old woman. He was sent to the Tuscaloosa County Jail. Not many are aware of what happened between the accused and the survivor. On Sunday, when he was placed in cuffs and walked to the police car, Miles shed tears and said, “I love you more than you imagined.”

Video of Darius Miles leaving the Tuscaloosa County Jail after being charged with capital murder following an early morning fatal shooting on the Strip in Tuscaloosa pic.twitter.com/zbBdQ0VKhb

According to ESPN, Miles was in the car with his friend, Michael Lynn Davis (20). It is mentioned that the pair fired shots at a car on The Strip, which eventually led to the death of Jamea Harris, a 23-year-old woman and a mother of a 5-year-old son.

Reports say that Jamea was in the passenger seat of the car she was sitting in. And when Darius and Michael fired, the driver in Jamea’s car chose to fire back as well. The wounds from these shots helped police identify the suspects, after which they interrogated them about the incident. The video of the incident was not captured. However, surveillance cameras in the area recorded the sound of the gunshots at the time.

Surveillance cameras capture the sound of gunshots that led to the death of Jamea Harris. Former Alabama basketball player Darius Miles maintains his innocence. All families involved are heartbroken. pic.twitter.com/pDp0GylJUK

As Tuscaloosa police Capt. Jack Kennedy said in a news conference, “At this time, it appears that the only motive was a minor altercation that these individuals had with the victim as they were out on The Strip.”

Alabama’s Darius Miles will be sidelined for the rest of the season with an ankle injury, per release.

Just a day before the incident, the University of Alabama announced that Darius will be missing the rest of the college basketball season because of an ankle injury. After Jamea’s unfortunate death, the institution announced that he was “No longer a member of the basketball team.”

The University of Alabama just sent the following statement on the arrest of basketball player Darius Miles. pic.twitter.com/v3NHhaM36e

Miles is currently maintaining his innocence. As sources mention, the 21-year-old is waiting for his opportunity in court. Until then, we would have to wait and see how this unfolds for Miles and Jamea’s family.