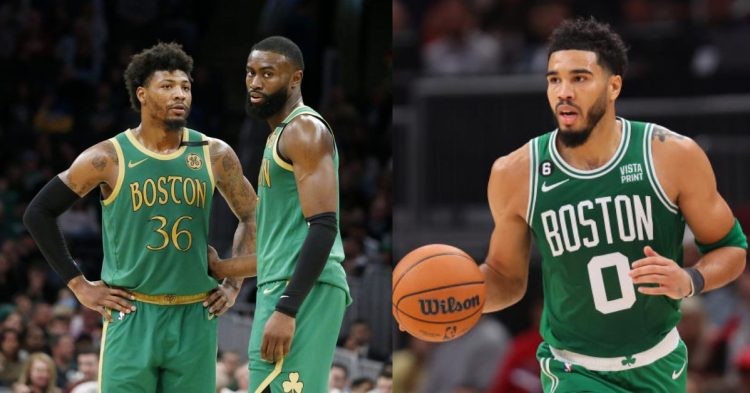 Jayson Tatum is coming off one of the best years in his career with the Boston Celtics. They finally managed to make it to the NBA Finals last year. However, the Celtics fell 2 wins short of securing a coveted NBA title for their franchise.

Despite this loss, and a controversial change in management this NBA offseason, Boston hasn’t really fallen back in terms of competitiveness and currently holds a record of  13 wins and 4 losses, the best in the Eastern Conference. However, it looks like their window of luck might be closing. JT has been diagnosed with an ankle sprain.

We are all familiar with the role of injury and luck in determining a team’s success. With that being said, we should wonder when the Boston Celtics star is expected to return to the court.

Will Jayson Tatum play against the Dallas Mavericks on Wednesday?

All of us are familiar with the frequency of injuries in the NBA. Most of them are usually on some part of the legs as they absorb and deal with incredible force in the game.

Tatum is currently listed as questionable for the game against Luka Doncic and the Dallas Mavericks and will be reviewed on a day-to-day basis. That means that he is not completely ruled out for that game although he likely won’t play for Boston. It is still unclear how exactly he suffered this injury. We know he played against the Bulls last and looked fine.

#NEBHInjuryReport for tomorrow vs. Dallas:

Thankfully the Celtics are currently on a roll and can afford to miss Tatum for a game or two. However, they will certainly need to be healthy and at full strength in order to beat the Dallas Mavericks. Tatum has certainly been the best offensive player and leader for Boston this season. Losing him will lead other role players to step up and perform for the team.

JT is averaging 30.2 points, 7.6 rebounds, and 4.6 assists. With the exception of perhaps Jaylen Brown, Tatum is the only player on the Celtics who can keep up with Doncic and the Mavs’ scoring pace. However, if he does miss this game, the Dallas Mavericks will be favored despite having a worse current record.

In any case, the Boston Celtics should probably make sure he is completely healthy when he returns to the court. After all, this is a long NBA season and the Celtics aspire to make the NBA Finals yet again.