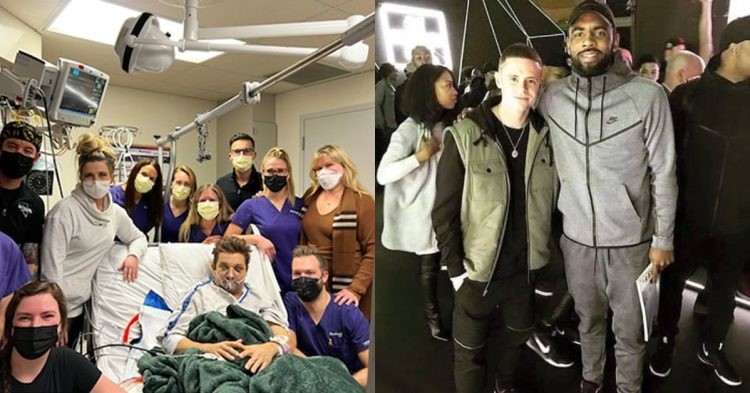 Jeremy Renner is one of Hollywood’s best actors. He is renowned for the ‘Hawkeye’ role he played in Marvel Studios’ films. Along with that, he has also featured in the Mission Impossible franchise’s movies, alongside legendary action star Tom Cruise.

Today, the world prays for the acclaimed actor who met with a snowplow accident a few days ago. Many celebrities and stars from the film industry have offered words of support to Renner in recent times. Chris Evans and Chris Hemsworth, who starred together with Renner, were two of the names to do so. Together with them, an NBA personality has also encouraged Renner after his unfortunate injury.

The American posted an image of his current state on Instagram, and captioned it, “Thank you all for your kind words. Im too messed up now to type. But I send love to you all.” Under the post, The Professor, aka Grayson Boucher also commented with the folded hands emoji, to express his sentiments.

Boucher isn’t an NBA athlete, but he has been heavily involved with the community over the years. He went undrafted in 2017 but stayed in touch with his basketball abilities on his YouTube channel even after that.

Will Jeremy Renner’s legs get amputated?

According to various sources, Renner’s leg was ran over by a snow plow. When he started losing blood, the actor was able to use a tourniquet, with the help of his neighbor, to help with the bleeding. This has led to various reports emerging, that mention he might have to get his leg amputated after the horrific accident.

After a terrible snowplowing accident, Jeremy Renner has been keeping us up to date on his recovery. On the day before his birthday, he thanked the medical staff.

We wish you a great birthday and a speedy recovery!

Despite spending his 52nd birthday at the hospital, he still thanked the doctors and medical personnel for helping him on the road to recovery. Posting an Instagram story a few days ago, he said, “Thank you Renowned Medical ICU team for beginning this journey.”

A neighbor, who’s a doctor, was able to put a tourniquet on his leg until paramedics arrived

However, there have been no official reports on whether he might lose his leg. The main reason for this would be because the medical staff are not allowed to share details of their patients’ welfare and developments without their permission.

Renner has also received support from the UFC community, where Grant Dawson also commented on the 52-year-old’s Instagram post. The NBA community prays for his recovery and hopes that he returns to the film sets soon, where he belongs.