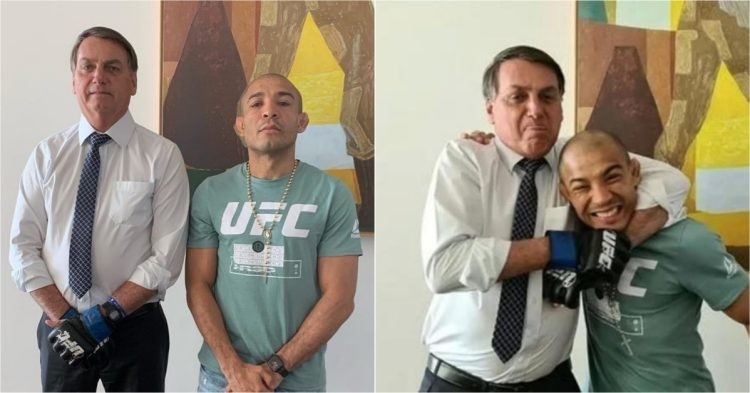 The country of Brazil is going through a tough period at the moment. Not so long ago, they laid their soccer legend Pelé to rest. The country is also in a state of unrest following a political insurrection, which saw a huge number of people trying to take over the country’s authority. And, in a surprising turn of events, former UFC champ Jose Aldo is also allegedly involved in the coup!

For some context, Brazilians had their general election in 2022. The former president Jair Bolsonaro lost the election to his opponent Lula da Silva. After his victory, Lula’s inauguration took place on January 1, 2023. At the time, Bolsonaro flew off to the USA. It is being reported that he moved in with the former UFC featherweight champ Jose Aldo.

Bolsonaro is back in the news in a big way, as his supporters have staged a coup in the capital of Brazil, Brasilia. Known as Bolsonaristas, his loyal followers attempted to topple the current government.

There are videos floating around the internet that show the carnage that has been caused because of the coup. While the former president is being heavily criticized, some have targeted Jose Aldo as well.

It is no secret that Jose Aldo is a close associate of the former Brazilian president. There are photos of Aldo, alongside other UFC legends at a private party with Jair Bolsonaro. Jair is an extremely polarizing figure in Brazil. Hence, some fans already raised their eyebrows when they saw Jose hanging out with Bolsonaro.

However, the news that Bolsonaro is allegedly staying in Jose Aldo’s Florida property, has pushed the fans over the edge. While some fans think Jose may face jail time for the incident, others have demanded that he be deported back to Brazil. So it is pretty clear that Aldo’s political affiliation may get him into trouble.

While Bolsonaro extremists storm Brazilian congress and the presidential palace, the former president is currently living in the home of ex-UFC champ Jose Aldo in Florida pic.twitter.com/PTf8LyRFQZ

I heard Aldo get’s a lot of hate in Brazil rn.

Damn I just lost all respect for Aldo

Jose Aldo going to prison for helping foment insurrection is the kind of shit to expect in 2023. The lid is off, MMA people be doing all kinds of wild ass crimes this year https://t.co/58HgkUZtwZ

Bolsonaro is staying at former UFC champion José Aldo’s house. So maybe one of the most beloved fighters ever had something to do or was at least a bystander to the planning of a right wing coup after cozying up to Bolsonaro the last few years. https://t.co/WBX9J2ikNk

Despite all the criticism, it is very important to mention that there is no evidence against Aldo. While he is allegedly letting Bolsonaro stay with him, there is no proof that Jose is involved in the coup at all! As of now, there is no official statement from the former UFC fighter to address the issue at hand.

In terms of his fighting career, Aldo retired after a humiliating loss against Merab Dvalishvili at UFC 278. But there have been some discussions lately that “The King of Rio” may make his boxing debut in 2023.

So what are your thoughts on the matter? Let us know in the comments down below.