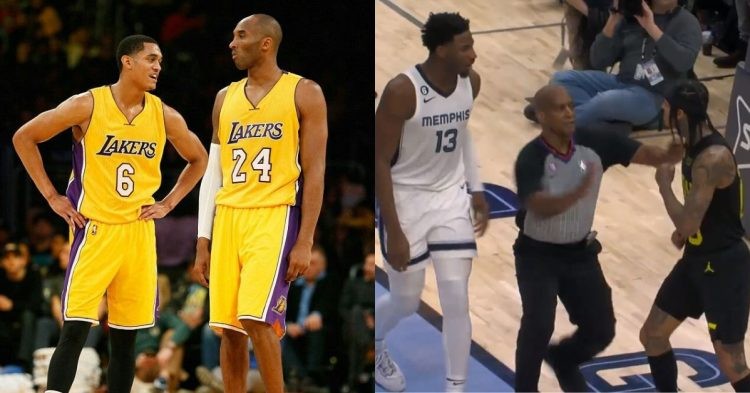 The Utah Jazz and Memphis Grizzlies faced off at the FedExForum recently. The Grizzlies won the game 123-118 with notable contributions from Ja Morant and Desmond Bane. However, despite the win, an altercation during the game attracted fans’ eyes. It involved Jazz’s, Jordan Clarkson and Desmond Bane.

In the third quarter, Desmond Bane dribbled past Clarkson, before passing it to David Roddy. This was when Clarkson swiped and hit Bane in the head. Grizzlies’ Jaren Jackson Jr. came to Bane’s aid immediately and stood up for his teammate.

Jordan Clarkson squares up IMMEDIATELY after swiping Desmond Bane on the head 💀 pic.twitter.com/xlQNRRvSVP

Despite the major difference in size, Jordan did not even hold back for a second and decided to square up. This attracted plenty of attention from fans, who claim Kobe Bryant was the reason behind this.

Fans believe that the late Kobe Bryant taught Clarkson to be on his feet at all times and throw hands when needed. A fan tweeted, “Kobe taught him that. Clarkson admitted it years ago. Kobe told him always get his hands up. Different league back then.”

Kobe taught him that. Clarkson admitted it years ago. Kobe told him always get his hands up. Different league back then.

Him and ja are the biggest fake thugs I’ve seen

Worst square up bro never been in a brawl 😭

Together with that, some claim that Jordan is one of the biggest “fake thugs” in the NBA, along with Ja Morant from the Grizzlies. For those who don’t know, Ja has a history of getting into it with other players on the court. This has often landed him in hot water as well.

The fan’s comments about Kobe bring us back to the past. Jordan Clarkson played for the Los Angeles Lakers from 2014 to 2018, alongside the Black Mamba. He has disclosed before that the 5x NBA champ taught him to always keep his hands up in case an incident goes down.

According to the Orange County Register, he said, “So I put my hands up to defend myself. I went back to stuff Kobe [Bryant] told me about an incident he had. He said to never have your hands down in case something happens.” This was when he got into an altercation with former Miami Heat’s Goran Dragic in 2017 which ended in ejections for both players.

It is interesting to see that players are still influenced by Kobe and the way he portrayed himself on the court. The Black Mamba wasn’t one to get into a fight unnecessarily, but he wasn’t one to back down from it as well.