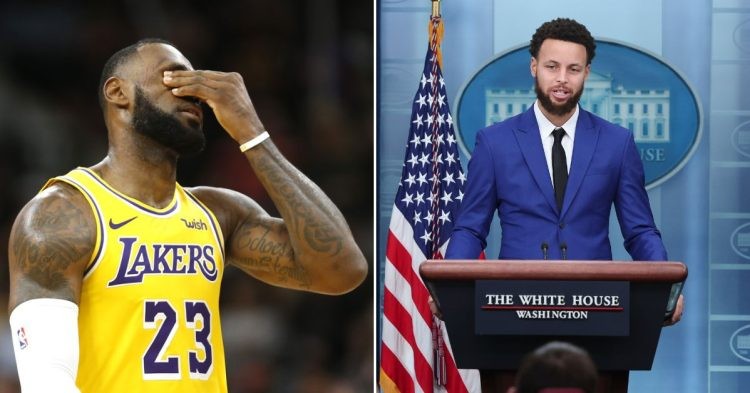 Stephen Curry and the Golden State Warriors went to the White House recently and the internet has been sent into a frenzy ever since. The NBA world has just witnessed the defending NBA champ Steph deliver a speech in front of US president Joe Biden and VP Kamala Harris. We can claim that NBA fans have reacted most interestingly, to say the least.

Steph Curry gave a briefing at the White House. pic.twitter.com/6UTxon6hwc

Curry and Golden State Warriors head coach Steve Kerr gave a speech at the White House yesterday. Along with them, Joe Biden and Kamala Harris also thanked the Warriors players and staff for their contributions to society. However, Steph’s appearance on the day prompted NBA fans to point out that LeBron James, arguably the biggest basketball star right now, could never achieve the feat. A fan even tweeted, “LeBron could never.”

That was not all. After the event, Joe Biden followed Steph on Instagram. The GSW superstar is the sixth person the US president follows on the platform. That attracted fans’ attention as well, as they believe LeBron could never reach a level where Joe Biden publicly acknowledges him.

This a stat nobody else has😂🔥

This is why Curry is the Goat🤷🏻‍♂️

The Warriors won the NBA championship in style last season, after defeating the Boston Celtics in the 2022 NBA Finals. It certainly looks like that win had a major role to play in their appearance at the White House recently.

Why were the Golden State Warriors at the White House?

The Warriors were invited to the presidential palace considering their 2022 NBA Championship win. When Steph was called to give a speech, he thanked Joe Biden and Kamala Harris.

Steph Curry’s speech at the White House 🏆 (via @ABC)pic.twitter.com/82ZN3XCwxw

He said, “We want to thank President Biden and Vice President Harris for the invitation to come here. It’s something that we don’t ever take for granted. To have this opportunity to reflect on the accomplishment last year, to bring everybody together to celebrate that, to also acknowledge the place sports has in bringing people together from all walks of life, all background, it means a lot.”

Along with that, Steph gifted Biden and Harris with a pair of GSW jerseys as well. It was a wholesome moment to witness for all, especially considering the vice president is a Warriors fan. Kamala Harris even said the infamous words “Dub Nation is in the house.”

“Dub Nation is in the house.”

Steph Curry and the Warriors are undoubtedly one of the biggest sports teams right now. It isn’t all that surprising considering the impact they have had on the NBA in the last few years. However, fans’ decision to question LeBron James’ influence might be surprising. Whether he has had a huge impact on the league would be subject to one’s opinion, as is the GOAT debate as well, in which many included Steph after his speech recently.