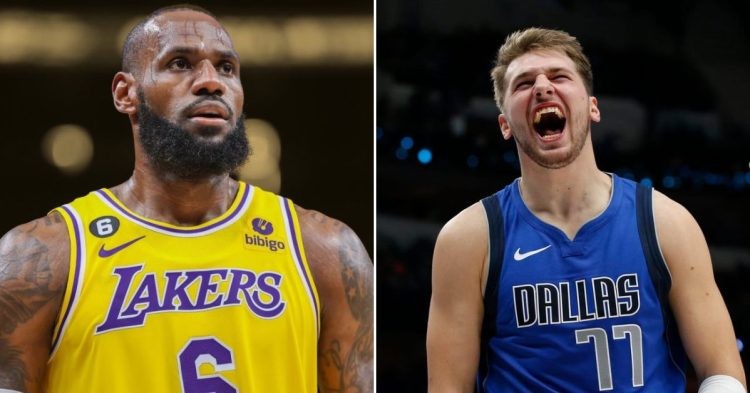 Luka Doncic’s performances in the 2022-23 NBA season have got the world talking about him. He has taken the league by storm and has truly cemented his place as one of the league’s best players. Another player who has reached a whole new level, if he wasn’t already undisputed, is LeBron James.

Both these players have been the star performers of their respective teams. Luka has touched great heights this season, as he breaks record after record. Recently, he became the first player to make 60 points, 20+ rebounds, and 10+ assists in a single game against the New York Knicks. It was quite evident when the season started that he would go on to be successful. But what has surprised us all is his consistency.

It surely reminds us of King James back in the day. It would be safe to claim that he reminds us of LeBron in the present as well, especially since the latter plays like he hasn’t aged one bit.

Is Luka Doncic the next LeBron James?

And we should also not ignore the fact that he’s edging closer to the great Kareem Abdul-Jabbar’s record to become the NBA’s all-time leading scorer. He has been taking heat after making 47 points in the last game of 2022 and then putting up 43 points against the Charlotte Hornets in the 2023 opener.

Doncic has proven that he is certainly a legend in the making, and that should be quite evident from the numbers he has put up. Although he has played more games than the LA Lakers forward, it is still astonishing to see the height Luka has touched. And the best part that we should always remember is that he is still yet to unlock his full potential.

LeBron and Luka are two of the best players in the league right now, in terms of scoring. Although his haters might argue that his prime is over, the King is still putting in a shift. Some might claim that he’s the past and Luka is the future of the league. But it surely looks like LeBron might be the present, however. Whatever the case, Luka Magic will surely reach LeBron’s level if he continues at this rate.