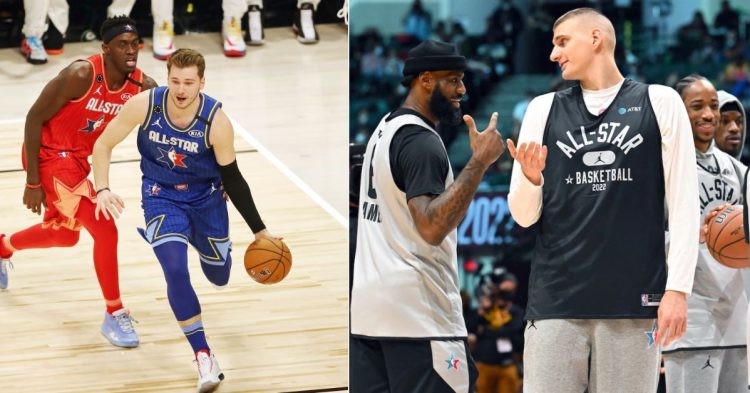 The NBA All-Star Fan Voting has begun and Luka Doncic is currently one of the most talked about players across the league. This is no surprise considering the incredible feats of elite play he recently displayed. As some of us already know, the fans play a huge role in the decision for which players participate in the All-Star game.

With that being said, let us take a look at what the results seem to be indicating at the moment. Especially surrounding Luka Doncic’s actual popularity with fans and how it compares with other stars in the league. However, we should also remember that there is still a lot more voting to take place and that this is only an initial picture.

The NBA All-Star voting process involves choosing guards and forwards from both conferences. The forwards are also called the front court. Despite his size, the Mavericks star is defined as a guard from the Western Conference. According to the report by NBA Insider Shams Charania, Doncic has an impressive 2.38 million votes so far.

That places him second, in terms of popularity, for guards from the Western Conference. The only player ahead of him is Golden State Warriors star Stephen Curry with 2.7 million votes. They are both miles ahead in terms of fan votes with Ja Morant in the third spot with 915,507 votes.

Neither Luka nor Curry had more votes than LeBron James, Kevin Durant, and Giannis Antetokounpo. They round up the top 5 spots as most players who currently lead the NBA All-Star voting.

Doncic alone at 2.3 million is ahead of several older and more experienced NBA stars. Players like Nikola Jokic and Joel Embiid both have around 2.2 million votes. The only other guards who are close to him in terms of popularity are Kyrie Irving with 2 million and Donovan Mitchell with 1.6 million votes.

Considering that Luka is turning into such a crowd favorite, we should wonder if this puts more pressure on him to perform. He is certainly the youngest player to have this amount of success that we have seen in a while. Hopefully, he is able to live up to these increased expectations.