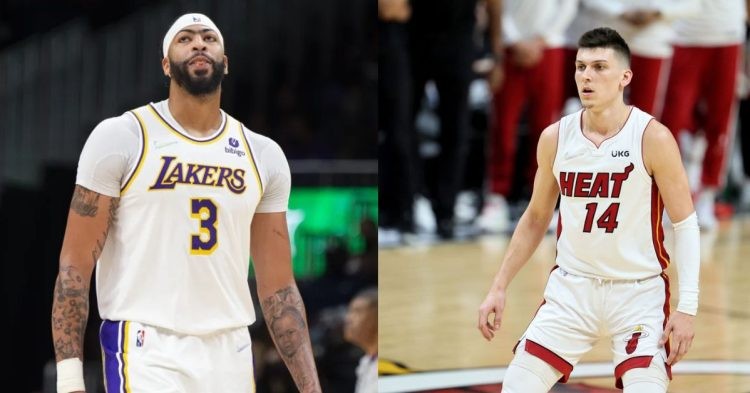 Anthony Davis and Tyler Herro on the court (Credit: Twitter)

We all know how important the role injuries have in deciding the fortune of a team. From Anthony Davis to Yuta Watanabe to Tyler Herro to many more athletes, there are several players who have already been injured and missed a few games.

As the NBA season continues, all the teams in the Eastern and Western Conferences have begun battling for seeding. This is in order to have a potentially deep postseason. Not having a key franchise player or even a significant role player can make a big difference.

We should wonder how short-armed teams will adapt and keep up in the 82-game regular season. Moreover, comparing and understanding the value of the player vs the nature of the injury is also important. With that being said, one should also want to know which player’s injury changes the success of his team the most.

It is obviously not an easy thing to compare injuries. Yuta Watanabe, Tyler Herro, and Isiah Stewart are all good role players. However, it is very difficult to proclaim that missing them changes their team’s potential and ceiling greatly.

This is not intended to slander any of these players. Nonetheless, the Brooklyn Nets would be the same without Yuta as it relies more on KD and Kyrie. Tyler Herro is certainly an excellent up-and-coming young star in the league. Be that as it may, it is difficult to claim that the Miami Heat are significantly worse without him. The Detroit Pistons are currently in a rebuild and have no real star talent. Therefore, we could say that Isiah Stewart’s absence does not change much for the team.

As a result, we are left with Anthony Davis. He was once proclaimed to be a top 5 player in the league and a rival to Giannis Antetokounmpo. However, these claims have been rubbished by many due to AD’s injury-prone nature and fragile physical state at times.

Moreover, it is impossible to deny that the Los Angeles Lakers desperately need what Davis has to offer. He is undisputedly the best defensive player and rebounder on the team. We all remember the role he played when healthy during the 2020 NBA playoffs. His team has rarely done well when he is on the sidelines. Therefore, we can conclude that losing him hurts the Lakers more compared to the other teams with players who are currently injured.
Tags: Anthony DavisNBATyler HerroYuta Watanabe
Previous Post