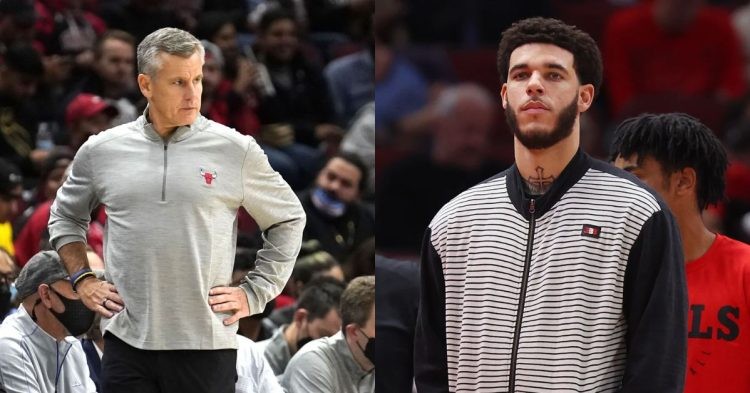 The Chicago Bulls are without their star guard Lonzo Ball. Ball, who has been absent for the Bulls for almost a year has made little progress from his knee surgery. It’s going to be a year since Ball has played basketball for them, and the Bulls coach has news for the fans. The Bulls coach Billy Donovan has spoken about Ball’s progress update.

Ball’s rehab has been slow due to the severity of the injury he suffered last year. The injury kept Ball out for 35 games for the Bulls last season and all of the games this season. He is a crucial player for the Bulls and will be waiting to get back on the court. However, there has been no significant progress to establish any timeline, at the very best Ball could be out this season as well.

Billy Donovan on Lonzo Ball: It’s been really slow. He’s working through more and more but we’re not close to running or cutting or contact. Said the pain issue is still improving but not in clear.

Coach Billy Donovan has provided an update on Ball’s rehab, “It’s been really slow; I’m just being honest.” Donovan gave a glimmer of hope to the Bulls fans, “I think he’s working through more and more, but it’s not like I can give you any report, ‘Hey, he’s running, he’s cutting, he’s jumping, he’s doing individual skill work, the next step is we’ve got to get him some contact.” Said, Donovan.

What injury did Lonzo Ball suffer?

The Bulls guard suffered a meniscus tear in his left knee at the start of 2022. The injury has kept him out for the Bulls for the remainder of the season. Ball underwent successful arthroscopic surgery, however, it wasn’t enough for him to return.

The Bulls insider K.C. Johnson has stated the bruise on the bone is the prime reason that aggravated the injury. It is the reason that Ball has been slow to recover.

Ball currently can jump, and run, but is still feeling the pain while doing these activities. Coach Donovan has updated on his physical condition, that Ball is yet to be cleared to get contact exercises. For the time being, the Bulls will have to make do with DeMar DeRozan and Zach LaVine to keep them afloat. At the moment Ball will be solely focused on completing his rehab and returning to the Bulls.