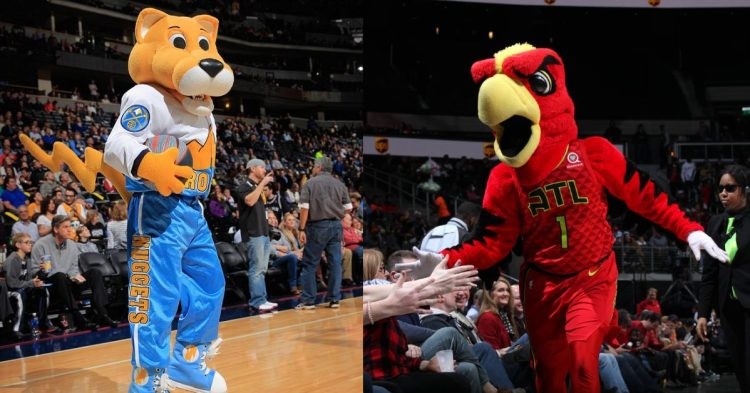 NBA Mascots Rocky the Mountain Lion and Harry the Hawk on the court (Credit: Twitter)

Fans are aware of franchise stars like Nikola Jokic. However, very few people are aware of the NBA Mascots and how much money they make. This is quite an interesting question and people will certainly want to know if it is a sustainable form of employment.

Not many people who watch the NBA on TV or internationally will even know about these Mascots. They have one single purpose, to entertain the home court audience and bring life to the bleachers during the game. This could actually be considered quite a fun job to have. However, does it pay a lot?

With that being said, let us take a look at the various popular NBA mascots and how much money they are able to earn through this job.

It turns out that some franchises are willing to pay a lot of money in order to have a good mascot. However, the key word here is “some.” An average NBA Mascot earns only about $100,000 annually. This is certainly a good deal considering all they have to do is be enthusiastic and entertaining.

The average is nowhere close to the top. Some NBA Mascots make multiple times the figures mentioned. This could be because they are good at their job. Or because the franchise is simply willing to pay that much. In any case, here is a list of the top-paid NBA Mascots.

As we can tell from the list, Rocky the Mountain Lion of the Denver Nuggets is the most-paid NBA Mascot. The rest of them earn somewhere around the same range as Hugo the Hornet.

It would interest many people to know that Rocky is making more money than some of the biggest names in the WNBA. Diana Taurasi is under a 2-year $449,544 contract. That means she is earning an annual salary of $224,772. Another WNBA star Breanna Stewart is making $228,094 annually.

Therefore, even if we combine both of these WNBA players’ salaries, it would look pale in comparison to what Rocky makes. If anything, this speaks to the value that franchises place on excellent NBA Mascots.