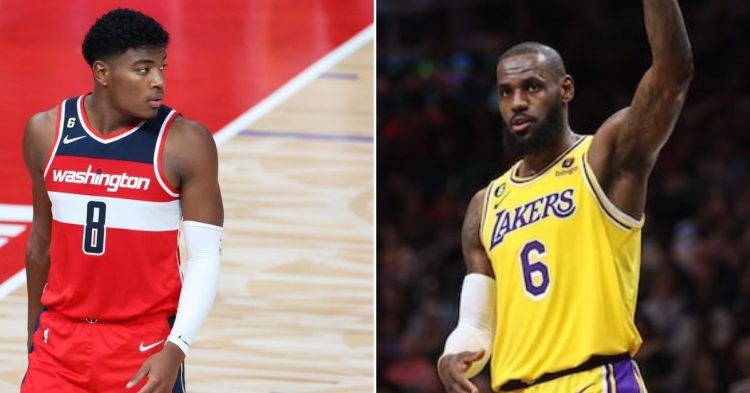 As the NBA trade deadline approaches, the Los Angeles Lakers might just be making a big move. As most of us will be aware, LeBron James and the Lakers have been struggling for this first half of this NBA season. They currently hold a record of 22 wins and 25 losses, giving them the lowly 13th seed in the Western Conference.

Anthony Davis has been injured for several games already and his return is still unclear Kendrick Nunn also missed a lot of time due to injuries along with other stars. On the other hand, LeBron James is still playing at an exceptional level despite turning 38 years old.

According to prominent NBA Insider Adrian Wojnarowski, the Lakers are on the verge of making a big acquisition from the Washington Wizards. Let us take a look at the reports, who this player could be, and whether he will fit in well with the Lakers.

Rui Hachimura is a young Japanese player currently playing for the Washington Wizards. He is 24 years old and has averaged 13 points, 5.1 rebounds, and 1.4 assists throughout his NBA career. Additionally, he has also been shooting an efficient 47.9% from the field and 35.6% from the three-point line.


It appears that the Lakers have shown an increasing interest in the Wizards star. After all, having a reliable NBA big man on the court to back up Anthony Davis and LeBron James should be a good idea. According to Woj, the Wizards are already in advanced talks regarding moving Hachimura.

ESPN Sources with @RamonaShelburne: The Wizards are in advanced talks on a trade to send forward Rui Hachimura to the Lakers. pic.twitter.com/fdyrE9hlTf

That would also make sense as he was due a contract extension. However, as we know, the Wizards soon took in Kyle Kuzma and Kristaps Porzingas. Thus, it became clear that they were looking to part ways with Hachimura.

“Hachimura and the Wizards were unable to agree on a rookie extension prior to the season and trade became more likely as Kyle Kuzma solidified himself as a priority to sign to a long-term deal in the Wizards front court.”

Hachimura and the Wizards were unable to agree on a rookie extension prior to the season and trade became more likely as Kyle Kuzma solidified himself as a priority to sign to a long-term deal in the Wizards front court.

There is no arguing that Kuzma has been playing better this season when compared to Hachimura. They both have quite different skill sets and can’t really be compared. In any case, this deal looks quite likely to go down. We might just see Rui Hachimura playing for the Los Angeles Lakers in the near future.