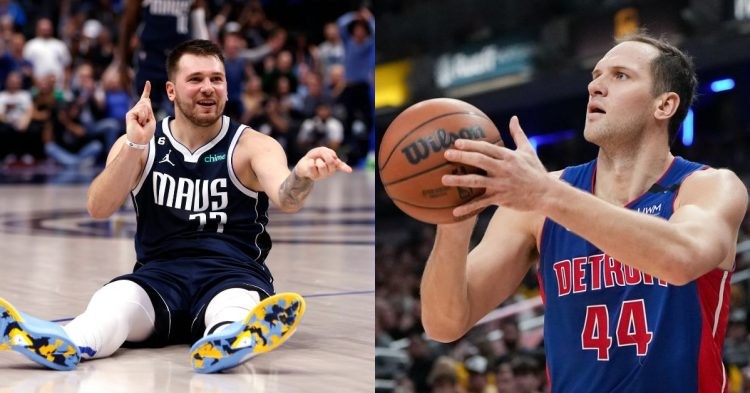 The Dallas Mavericks seem to be improving on their season in recent games. The Texas-based franchise has a record of 22-16 in the 2022-23 NBA season so far. Luka Doncic has undoubtedly been their player this season. The Slovenian has managed to bail the Mavs out of tricky situations at times and seems to be in the form of his life. However, it’s only a matter of time before he suffers an injury.

The Mavs are in dire need of a player to partner up with Luka at the backcourt. Right now, Jason Kidd has lined up Spencer Dinwiddie in that position. But unfortunately for the Mavs fans, this combination doesn’t seem to be clicking always. This is one of the reasons why the Mavs board is reported to be in the market for an addition to the team.

Will the addition of Bojan Bogdanovic to the Dallas Mavericks take some pressure off Luka Doncic?

Mark Cuban and Nico Harrison seem to be interested in Detroit Pistons’ Bojan Bogdanovic. The Croatian has been phenomenal for his team so far this season. In 40 games, he has averaged 21.1 points, 3.6 rebounds, and 2.7 assists this season. The numbers indicate that he might be a good addition to the Mavs locker room after all. But will he click with the rest of the players in Dallas? And do they have the right package to lure the Pistons?

One of Bojan’s best performances this season came against the defending champs Golden State Warriors. He led the Pistons to a 119-122 win after contributing 29 points on the night. The Mavs might have been in the arena witnessing his scoring prowess on the night.

The Pistons are seeking at least one first-rounder and either a young player with upside or additional draft capital in exchange for Bojan Bogdanovic, per @JakeLFischer pic.twitter.com/8O7nWpkCx2

It will be a good time for the Pistons to let Bojan go, however. The main reason for that would be that Bojan is 33 years old right now. If we claim that he is in his prime right now, they should be looking to make the best out of him, or let him go in a good trade package. If the reports are right, it looks like that’s what they are aiming for the latter.

It is quite evident that Bogdanovic will surely enhance the Mavs in the shooting department. His shooting seems to be at a career-high this season as well (FG 48%). Moreover, the Croatian will be the big man with the ability to make his own plays they need right now. After all, they have relied on Luka on too many occasions this season. Their opponents have caught on to Luka’s plays at times and have locked him out on rare occasions.

With that said, the addition of Bojan will also depend on his monetary value. He’s on a $19.3 million-per-year contract right now, which is certainly doable for the Mavs board. We would have to wait and see if Mark Cuban secures Bojan’s signature before the other NBA franchises do so.