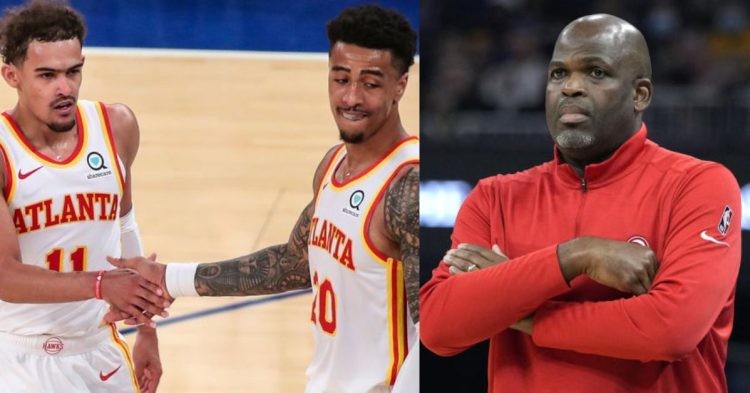 Trae Young and the Atlanta Hawks might just be about to make some changes. Not many NBA fans are aware of what is going on with the team at the moment. Trae and his coach Nate McMillan have been at odds recently. Additionally, there are constant trade talks involving Hawks star John Collins.

All this has the potential to trouble Hawks fans, who enjoyed a trip to the Eastern Conference Finals in 2021. Collins was an integral part of the Hawks’ postseason run that year. However, it looks like the team is keeping its eyes on the future.

With that being said, we should wonder what is going on with the Hawks and what potential moves they could make in order to make the team a true contender.

What went wrong between Trae Young and Nate McMillan?

It is always a serious problem for a team when the star player and coach are at odds with each other. Well, that is exactly what is currently happening with the Atlanta Hawks. According to sources, the Hawks star got into a disagreement with his coach before their game against the Denver Nuggets.

The argument revolved around whether Trae should shoot around with the team or focus on his rehabilitation. When Young wanted to focus on healing his right shoulder, Nate told him that would mean coming off the bench and playing limited minutes for the team. Or missing the game altogether.

It turns out that Trae decided to call this bluff. He did not participate in the shootaround and missed the game. Nonetheless, his team was able to win. But the lingering feelings of tension and frustration likely stayed with the team.

The Hawks have no real reason to fire their coach, who is in his third year with the team. Additionally, trading Trae Young is definitely not the right call if the Hawks wish to be contenders. As we all know, sometimes a team’s management makes changes in order to give the team a fresh start.

This might end up being the decision to trade John Collins instead of moving Young or changing coaches. After all, Collins is sidelined with a left ankle strain. Nonetheless, the team is doing quite well led by Trae Young and Dejounte Murray.

Collins is currently on a 5 year $125 million contract, making about $25 million per year. There are an ample amount of stars across the league who can be traded to the Hawks fitting this salary. Draymond Green, Julius Randle, Buddy Hield, and Mike Conley are some of the players making that much with teams that are not doing so well.

Since they make a similar amount of money as Collins, a trade would certainly be possible. However, the Hawks should consider being prudent and waiting to see what shape he returns in. By doing so, they can also gauge his current market value and what he still brings to the team.