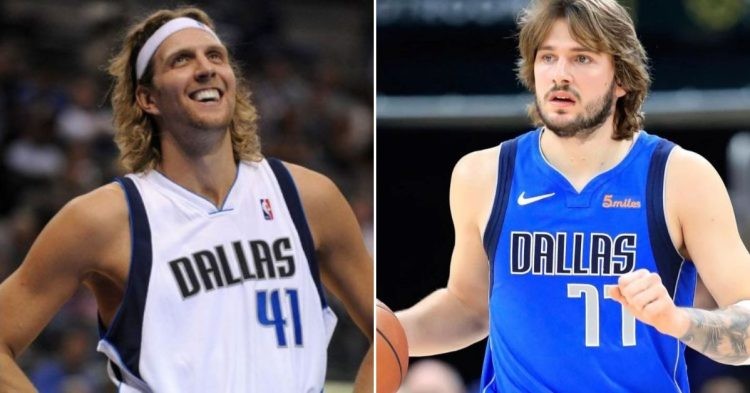 Luka Doncic is having a gem of a season with the Dallas Mavericks. Ever since joining the Mavs, he is turning heads in the entire NBA. Often referred to as the next LeBron James, Luka is winning hearts all around.

When his stats are compared to James’, he is doing better than what King James did during the same age. However, since he is leading the Mavs, he is probably the next Dirk Nowitzki for the Mavs fanbase.

The 24-foot statue depicts the signature one-leg fadeaway made famous by Nowitzki, the only NBA player to spend all 21 seasons with the same franchise.

Dirk with his iconic one-legged fadeaway, his rainbow three-pointer, and his long hair, led the Mavs to an NBA title. Dirk led the Mavs to their first-ever NBA title in the franchise’s history. After his retirement, the Mavs have only seen downfall.

However, that has changed under Luka Doncic, who has emerged as the sole bright light. A Twitter user uploaded a photo of Luka with long hair and opined if he did, he would be unstoppable. So, do the fans think so?

Gonna be averaging 40 points, 20 assists, 5 rebounds and 3 white women per game with that look.

It is a fact that the Mavericks need to step up their game to be standout title contenders, and it feels that Luka might have to perform better than what he is already delivering to replicate what Dirk Nowitzki did in 2011.

For sure needs to go full Dirk Nowitzki

We all need this

Luka with long hair as opined by the fans looks like a Bee Gees singer from the 1970s. It certainly has us convinced with the look in long hair.

And he could be part of the Bee Gees

Many consider Nowitzki as one the greatest scorers in the game. Dirk and company won their first-ever championship against a Miami Heat team, which had LeBron James, Dwyane Wade, and Chris Bosch. Mavericks did this in the 2011 NBA Finals, and hence also took revenge for the loss during the 2006 NBA Finals.

Luka at the age of just 23 has taken the NBA by storm. If the Slovenian decides to grow out his hair like the icon, Dirk, and puts up the same effort, he’ll be highly regarded among the Mavs fanbase. What Luka has been doing for the Mavs is great already, and for every winner a little more is always required. Luka will be challenged multiple times, and just like the German, he will have to go all out for his team.

With Luka, the Mavs have made it to every post-season run, but they haven’t managed to get to the NBA finals. Doncic is having a season, worthy of an NBA title. If the Mavs can pair him up alongside Trae Young, they would make a much stronger case.

Just like how Dirk Nowitzki, Jason Terry, and Jason Kidd lined up in the 2011 NBA finals. We could hope for a Luka, Trae Young, and Spencer Dinwiddie line-up going into the next chapter. The Mavs are currently being coached by Jason Kidd. He knows what the signing of Trae would bring out of Luka in the game. It will be exciting to see Luka in long hair but for now, it’s short hair for us.