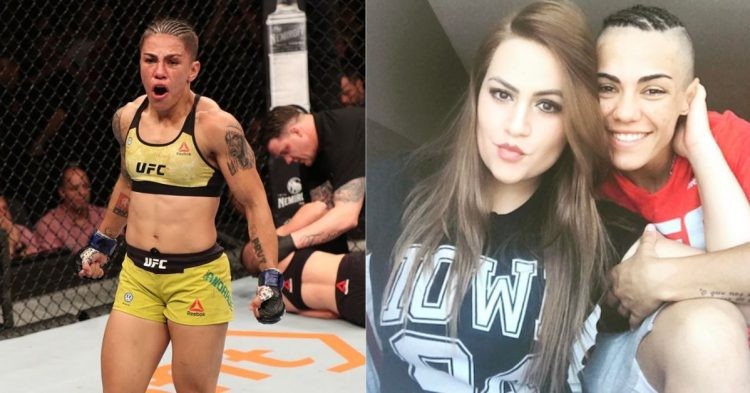 Jessica Andrade is one of the few openly homosexual fighters in the UFC. Andrade is a lesbian and she has never shied away from that aspect of her life during her career. In doing so, she has become a role model for any budding MMA fighters who also belong to the LGBTQIA+ community.

Once in an interview with MMA Junkie, she detailed how her sexual orientation had affected her personal life and fighting career. Andrade said, ” I think that every interaction, in or out of fighting, is an opportunity to show that we are normal people. Our behavior isn’t defined by our sexuality. My way of communicating and caring for people will always be the same. Being attracted to the same gender doesn’t really make us different.”

Jessica continued, “When I was booked against Liz Carmouche, some people were saying that no one cares to see lesbian behavior in the cage. They were saying they’d rather see real fights. But I’ll never change my way of being to make some people happy. In the octagon, I’ll always be the same fighter.”

It seems Jessica Andrade wants to change the perception of homosexual fighters in MMA. Being a former UFC Women’s strawweight champion with 4 title fights in her career, there certainly aren’t too many fighters who are better suited for that task than Andrade. The Brazilian fighter will take on Lauren Murphy on the main card of UFC 283 in her home country.

Jessica Andrade’s wife Fernanda Gomes, was her long-time girlfriend before the couple tied the knot in 2019. In 2017, after Jessica’s loss to Joanna Jedrzejczyk, she proposed to Gomes marking the first-ever in-ring proposal in UFC history. Gomes is a biologist by profession. She is also a Jiu-Jitsu practitioner and regularly trains BJJ with her father and Andrade. The couple does not have any kids yet.

Apart from Andrade, the UFC also has a few other openly homosexual fighters on their roster. Most famously, Amanda Nunes, the UFC GOAT  is one of the more prominent members of the LGBTQIA+ community in MMA.

She is the only female to simultaneously hold two titles in different weight classes. Amanda is married to fellow UFC fighter, Nina Ansaroff Nunes. Her former rival, Raquel Pennington is also an accomplished fighter and former champion who candidly came out to her fans. Raquel is in a relationship with strawweight fighter, Tecia Torres.

The Mexican-American fighter, Jessica Aguilar once revealed that her sexual orientation as a gay, didn’t affect her fighting career negatively. She was the WSOF’s first female champion. British fighter Molly McCann is also a homosexual and she recent got engaged.

The UFC certainly has come a long way, becoming more progressive with each passing day. There is, however, yet to be an openly gay male fighter in the UFC. However, Dana White has expressed that any fighter who takes the brave step of coming out will be fully supported by him and the UFC.