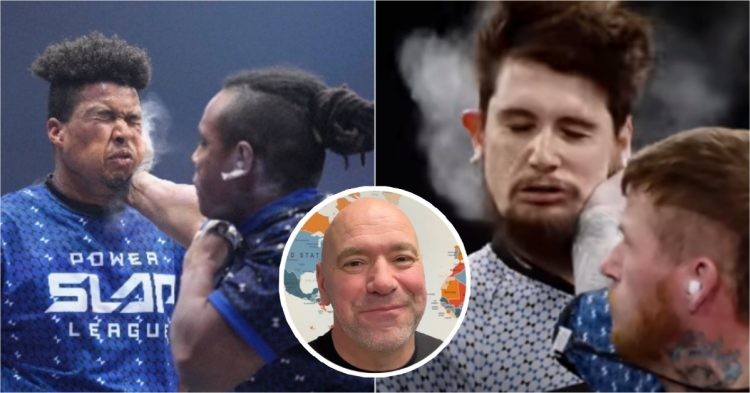 UFC President Dana White launched his latest venture Power Slap on January 18. White sold it as a guaranteed source of entertainment and had nothing but good things to say about the new competition Although the initial announcement did not have much reaction to it, Dana faced a massive backlash after the video emerged of him slapping his wife. Recently, boxing prospect Ryan Garcia also spoke out against it!

Ryan recently took to Twitter and slammed the whole endeavor. Garcia is a boxer by profession and even he can not stomach the recent clips of the viral knockouts circling around the internet

Power slap is a horrible idea and needs to be stopped

MMA fighter Gerald Harris seemingly defended Dana’s idea and pointed out the fact that Ryan himself dishes out a ton of punishment with his hands.

However, Garcia eloquently explained that boxers/fighters have the opportunity to protect themselves from incoming strikes. But in Power Slap, the competitors can not defend themselves from the slaps and take the blows on their chin.

Bro don’t miss the obvious, we have a chance to defend they don’t it’s just stupid no need to debate

Former UFC women’s featherweight champion Cris Cyborg also replied to Garcia’s tweet and questioned the quality of the contestants in the show. Cyborg claimed that some of the female contestants did not even have a martial arts background.

Current UFC lightweight fighter Al Iaquinta also weighed in on the issue. Although he did not spend too many words on it, his post was not very appreciative of the Power Slap either.

However, Dana White did not seem too bothered by all the criticism. When the reporters asked whether airing the show so soon after his altercation with his wife was a good idea or not, Dana brushed it aside. He seems fully invested in the idea and is not going to give in to public pressure.

There is obviously a danger that the actions at the Power Slap League may result in some serious damage. In some of the highlights, fans have seen some contestants getting horribly knocked out. It did not sit well with fans as they expressed their concern over it.

Just here to say that #PowerSlap is dangerous and fundamentally wrong.

Dana White should hang his head in shame with this. The fighters are at risk of serious long-term brain trauma.

I don’t want to know how much money went into this Power Slap shit. Why not put that money towards making the UFC a better overall product and legitimizing the sport? It’s also dumb af lol. 🗑️ 🤦🏻‍♂️ 😩

I just don’t see the attraction to Power Slap. Feels like you have to be sadistic to like it.

More of a sport than “power slap” https://t.co/X9U7vBfJZm

Judging by the reactions, it is pretty obvious that there is a long road ahead before Power Slap wins over the fans.

Ryan Garcia is in talks to fight Gervonta Davis next

Ryan Garcia is no doubt the most known youngster in boxing. Although fighters like Shakur Stevenson and Teofimo Lopez are certainly making big noises in the sport, Ryan’s fan following is unmatched. While he has fought good competition in the form of Luke Campbell and Javier Fortuna, Garcia’s biggest challenge will be against Gervonta Davis next.

Recently Davis knocked out Hector Luis Garcia to defend his WBA (regular) lightweight belt. After the bout, Garcia tweeted out his intentions to fight Tank next. They have been on a collision course for a long time. There are talks that the two will fight at a catchweight of 136 lbs. So it will be interesting to see who comes up on top in the clash.