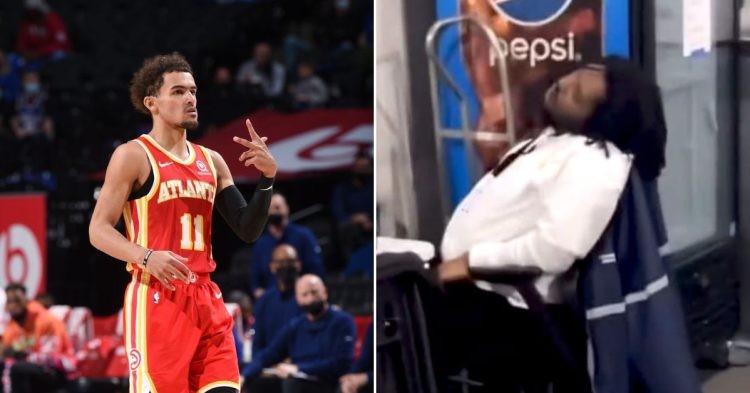 Trae Young and the Atlanta Hawks traveled to the Sacramento Kings’ place to play against them. The NBA world was excited to see the Hawks would bounce back after the disappointing loss to the defending champs recently. It was a close game indeed, as they triumphed in stunning fashion in the end as the game ended 117-120. However, their win wasn’t the only thing to catch the eye of the fans on the night.

Before the game, Trae was entering the Golden 1 Center Center for the game. It was standard procedure for NBA players to go through security at every franchise’s stadium. This is done to ensure that the fans and players are in a safe environment. However, to Trae’s shock, there were no security checks done at the entrance!

Players were arriving to the game and homie was KNOCKED 😭 @TheTraeYoung pic.twitter.com/PNm9vDYJAo

Trae posted a video of this to his Instagram, where he caught a security guard sleeping on the job, while he was supposed to run checks that night.

Young posted the clip and pointed out the fact that he could “Walk right through the thing”, indicating that no one was standing by the full-body scanner at the entrance. This attracted a series of hilarious reactions from NBA fans. Some took shots at the Hawks guard as well.

same security that let fake klay in the arena 😭

Some highlighted the fact that it could be the same security guard who let “Fake Klay in the arena.” For those who don’t know, Dawson Gurley, also known as ‘BigDawsTv‘ according to his YouTube channel, once snuck into the Chase Center disguised as Klay Thompson. This happened during the 2022 NBA Finals. The Golden State Warriors franchise then banned him from the arena for life.

@TheTraeYoung now why would you go and do that to that security guard… Dude was probably hoping someone would sneak in and switch you with Luka.

Damn Trae getting security and the coach fired huh?🤣

Trae young lame asf for exposing that security guard sleeping on the job. Nigga you sleep on defense every night nd no one says shit. Smh. Goin get that man fired just for clout.

At the same time, NBA fans took a jibe at Trae directly as well. One asked why he could sleep on defense every game but the security guard wasn’t allowed to. It is no secret that Trae’s defensive abilities have come under heavy scrutiny from fans in the past. This would be a reference to that as well. Together with that, another fan asked if he was aiming to get the Hawks coach and the security guard fired.

For context, there have been various reports of a rift between Young and Nate McMillan when the Hawks guard missed a game. Whatever the case, we still do not know if the Kings’ security team fired the guard who Trae caught sleeping.