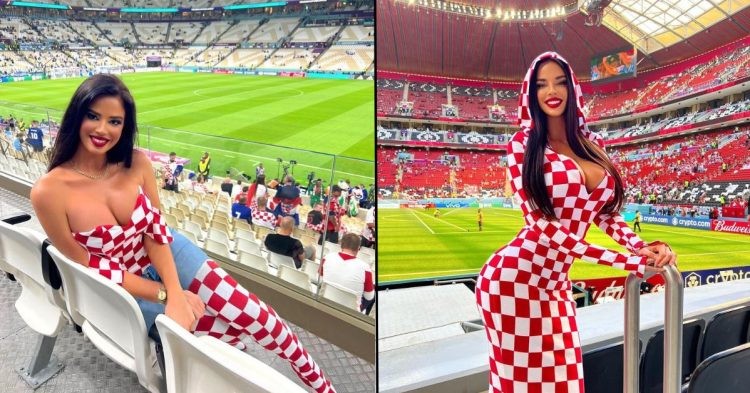 The FIFA World Cup 2022 was one that the soccer world was entertained by. Lionel Messi and Kylian Mbappe gave us all a historic show in the final in Qatar. It ultimately ended in the 7x Ballon d’Or winner lifting the prestigious golden trophy with Argentina. One of the most memorable personalities in Qatar last year was Ivana Knoll. Not many were familiar with who she was, but that was until her appearance at the World Cup.

Recently, she caught the soccer world’s attention after exposing players at the World Cup. It turns out she has caught players’ attention with her bright and red-colored, Croatian-themed outfits as well.

On a podcast with Barstool Sports, she said, “Yes! I remember that some players sent messages like ‘how are you, blah, blah, blah, blah. Some of the players were apologizing for tomorrow the day before the game. I didn’t respond until they lost!”

Along with that, Knoll also mentioned that she was not interested in meeting anyone to possibly have a relationship. She was rather interested in making others smile and having fun. Together with that, the Croatian model also believes that she has gained attention for her looks.

How did Ivana Knoll gain popularity?

Ivana Knoll first caught attention with her eye-catchy outfits that were, as some would claim skimpy too. However, she has always been pretty famous in Croatia. The model won the title ‘Miss Croatia’ in 2016 and has been going strong in the modeling industry ever since. However, despite that, it’d be safe for us to claim that she only garnered an even bigger following after the World Cup in Qatar.

During the World Cup, reports were circulating that Ivana would be arrested for not following the dress code and adhering to the country’s laws. However, she later disclosed that she wasn’t held back by the laws in terms of dress code, and she did not face any issues from the government regarding her choice of clothing.

She has garnered a huge following, thanks to her appearances at the World Cup as well. The Croatian model has about 3.5 million followers on Instagram as of January 2023. Together with that, she has been seen hanging out with renowned artists Drake and Jamie Foxx as well.

Knoll has making appearing on FIFA’s stage for a while now. She was seen in the stands at the 2018 FIFA World Cup as well. It looks like her love for Croatia runs deep. The European country went until the semi-finals, where Luka Modric and Co. toppled to the eventual winners of the tournament.