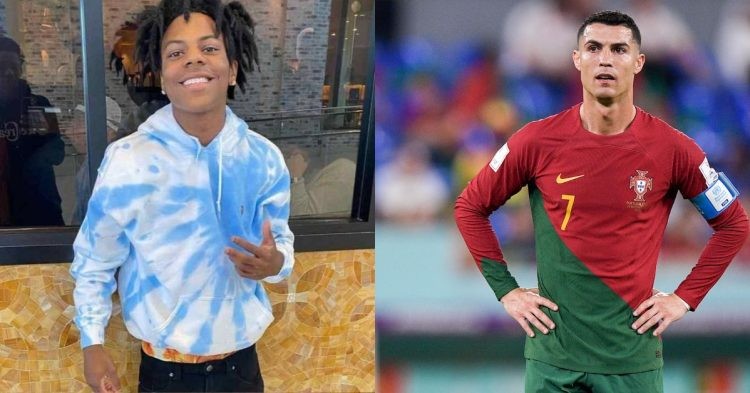 Cristiano Ronaldo fan IShowSpeed has shown a huge deficiency of soccer knowledge in a viral video and fans are outraged. Speed is seen misinterpreting a Leicester City red and black shirt as an AC Milan shirt. One fan said, “He is a fraud”, he was appalled at the lack of soccer knowledge Speed possesses.

Speed, whose real name is Darren Watkins Jr., is an American internet personality. He is a YouTuber and streamer. Speed is mostly known for his variety of live streams where he is playing video games and talks to fans.

During one of these conversations with a fan, it was found out that he is a Ronaldo fan. He has since had a meteoric rise on social media and received huge fame. He has been to Old Trafford to watch Manchester United and Ronaldo play, however, Ronaldo did not appear in that game. Speed took another shot at the World Cup 2022 in Qatar and succeeded in watching Ronaldo play.

In a recent video released by Goal on Twitter, Speed openly shows the lack of soccer knowledge he possesses by not recognizing any soccer team jerseys. Here are some fan reactions to his horrible mishap:

He is a fraud

Who’s this guy? Never heard of him 🤔

Speed picked up a Leicester City shirt and said the name Rafael Leao, claiming it was an AC Milan shirt. Luckily, on the second asking, he recognized Leicester’s jersey.

Speed made several mishaps in the viral video on Twitter that was released by Goal. One of them was that he believed the English League One, which is the third-tier league in England, was Uber Eats Ligue 1.

He found an Ipswich Town jersey and said, “Town FC? Never heard of that club. It is probably trash.” To his query, his counterpart replies, “Ipswich. They are in League One.” Speed replied, “Uber Eats. Come on now bro. Think about it,” misunderstanding League One as Ligue 1, the French top tier.

He was later shown a Newcastle United jersey and asked, “Newcastle? Doing very well at the moment.” Even after being told that they are a Premier League, Speed failed to recognize it. He said, “Never heard of that team, I don’t know why bro.”

Speed was recently seen at the exhibition friendly between Paris Saint-Germain and Riyadh All Stars XI. He fulfilled his wish of watching Ronaldo play against Lionel Messi and cheered for the Portuguese star when he scored.