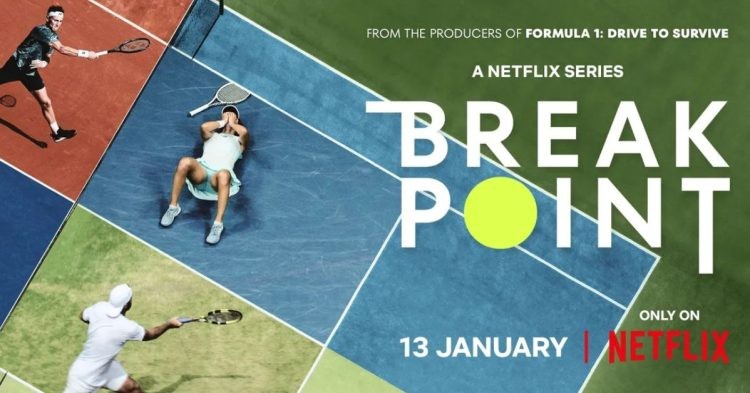 Break Point, a documentary by Netflix

Just as we enter 2023, lists of new TV Series, documentaries, and movies to be released this year have begun pouring. Under the rather fascinating list lies a documentary titled Break Point which certainly has risen amongst the ranks of getting acknowledged with its upcoming release in the tennis world.

Gearing up to be Netflix’s latest sporting venture after the much-successful Formula 1: Drive to Survive, the team behind the 2019 smash-hit is all set to bring its sports enthusiast, viewers, exactly what they’ve been longing for. Let’s dive into the details surrounding the Break Point’s content and release date.

When will the Tennis documentary Break Point release on Netflix?

Starring big-time tennis stars Nick Kyrgios, an Australian tennis professional known for making controversies, Iga Sviatek who currently is ranked world no.1 by the WTA, and Stefanos Tsitsipas; the documentary is set to revolve around the hottest names in tennis as their journey to compete in ATP tournaments and Grand Slams against top professionals all over the globe.

The streaming site hosting the documentary’s release, Netflix, has uploaded an official trailer ahead of its launch finessing some of the fittest athletes of ATP and WTA in action.

Break Point season 1 is set to release on January 13, 2023. The episodes in the season will be released in two halves i.e episodes 1-5 to be released this month and the remaining, 6-10 to land in June 2023 for which the exact date is yet to be confirmed.

On Netflix, the official synopsis states that the episodes will cover the excruciating struggle of athletes when competing in the professional while getting close to the players touring the 2022 season. Viewers will get to see behind the scenes of players’ personal moments, joyous victories along with triumphant celebrations with their crews.

With a merry-go-round of emotions propelled by heartbreak and life-threatening injuries, the documentary is set to broadcast pressure testing lives of the top tennis players in the world.