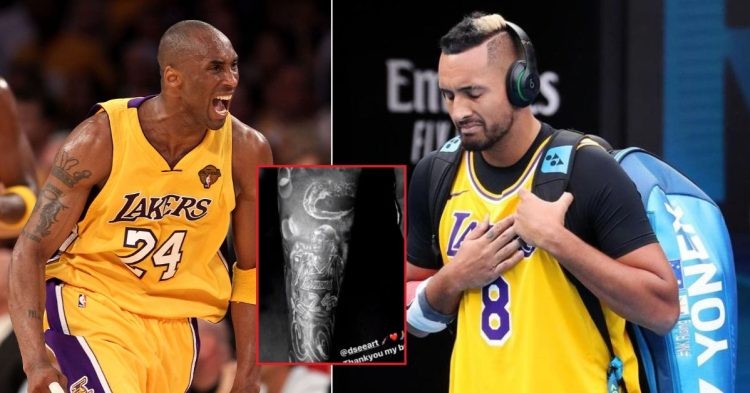 Australian tennis star and basketball fan Nick Kyrgios paid a fitting tribute to late basketball legend Kobe Bryant. Kyrgios, who is well known for flaunting his unique trick shots and having dramatic outbursts on the tour paid homage to the late LA Lakers star Kobe Bryant by tatting himself on the arm.

“Kobe and the king with me forever,” Kyrgios captioned in a video in which he shows off his tattoo of Kobe, LeBron James, and Michael Jordan.

The NBA legend Kobe, a five-time winner of the NBA championship with the Lakers, tragically passed away, along with his 13-year-old daughter Gianna and seven others in an unfortunate helicopter crash on January 26, 2020.

The tragic news of Kobe Bryant passing away reached Nick when was playing at the Australian Open and had just arrived for his pre-quarter match against Rafael Nadal.

To honor Kobe’s memory and pay homage to the NBA star, Kyrgios wore Kobe Bryant’s iconic Los Angeles Lakers jersey no. 20 and broke down in tears moments before the match. Nick also paid tribute to the late star after the match concluded.

👏👏 ¡Deserved tribute! The Australian Open pays tribute to the late legend Kobe Bryant and that is why Kyrgios took the field to face Nadal in the Los Angeles Lakers NBA jersey.#AusOpen #Kobe #KobeByrant #KobeRIP pic.twitter.com/LortqjYlkI

In this video on his Instagram handle, Nick Kyrgios revealed his new tattoo which he dedicated to his idol, Kobe Bryant. He also got inked Los Angeles Lakers star LeBron James and one of the legendary icons in basketball history, Michael Jordan.

Kyrgios had in a different video revealed why he wanted to ink the image of his idol on his sleeve. “When I saw the image, I realized it was that. I wanted to tattoo something from Kobe after everything that happened,” said Nick.

With such deep affection and love for his idol, Kobe Bryant, and other basketball stars, it is clear that Kyrgios does not shy away from showing his dedication to basketball as a sport and flaunting the inspiration it carries for the young Aussie.

What Is Stephanie McMahon’s Net Worth in 2023 After Resigning From WWE?