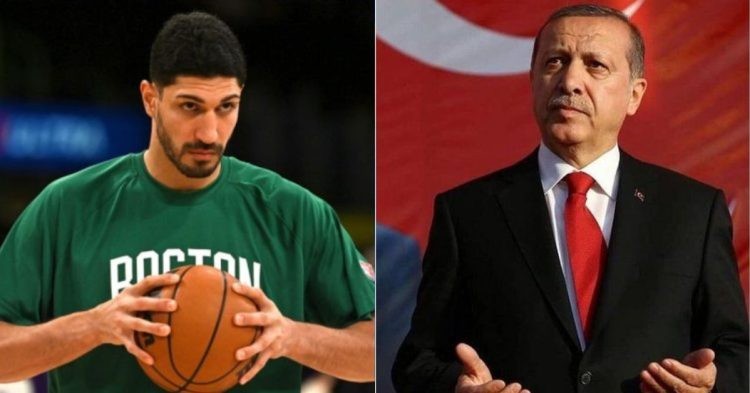 The NBA has come under heavy scrutiny for its links to China. The majority of the criticism has come from a former player, Enes Kanter Freedom. He used to play for the Boston Celtics, Portland Trail Blazers, New York Knicks, Oklahoma City Thunder, and a few other NBA franchises. Freedom was part of the league until he decided to call it in the NBA in 2022. Right now, there have been huge developments in his career.

BREAKING: The Turkish government has placed a $500K bounty on Enes Freedom and has put him on the “Terrorist Wanted List.”

In an interview with Post, Freedom disclosed that there was a bounty on him of $500,000. He mentioned that Turkish president Recep Tayyip Erdoğan’s government has decided to act on the comments and criticism that Freedom has been shooting their way. The Turkish-turned-US citizen has shot back at these claims with a Twitter post recently.

Come and get it @RTErdogan!

Wanna waste half a million?
Be my guest… pic.twitter.com/3jLAqVF2V5

Apart from that, Enes also revealed his plans to sue the NBA in the future, which has caught the world by surprise.

Why does Enes Freedom want to sue the NBA?

It is no secret that Freedom doesn’t shy away from an opportunity to stand up for what he believes is right. He has taken public shots at the NBA, along with Nike, for their partnership with China. For those who don’t know, Freedom even criticized the league when they announced there won’t be games held on Election Day in August 2022.

He also added that he was waiting for the right time to sue the NBA. Why you may ask? He believes that the NBA “blackballed” him for speaking up against their links to China and after he criticized The Association after their silence on certain matters.

He said, “The NBA is never going to admit it, but I believe I’m being blackballed. I’ve had many conversations and everyone is saying the same thing: ‘Your career has ended because of your China comments.'”

Enes Freedom on if he isn’t in the NBA due to comments made about China or because he’s too old:

“…I could’ve played in the league another 6 years… you’re telling me in 1 year I forgot how to play basketball? That’s a lie… everybody in the NBA knows I am being blackballed.” pic.twitter.com/HzTYuwZmKM

“They are a 100% American made organization, but they are being controlled and run by the biggest dictatorship in the world, China. How can China fire an American citizen from an American organization? That is unacceptable,” he mentioned to the Post.

This hasn’t been the case with just the NBA, but 4x champ LeBron James as well. Both parties have been extremely quiet about their connection with China, to the point where NBA fans started speculating that King James could receive $1 billion in ‘hush money.’

Contrary to what Enes believes, NBA commissioner Adam Silver buried the claims that mention the former Celtics center was being blackballed. He also mentioned that he communicated with Freedom to voice his opinions and stand up for what’s the correct thing since it’s within his own right. However, this hasn’t seemed to have convinced Freedom.