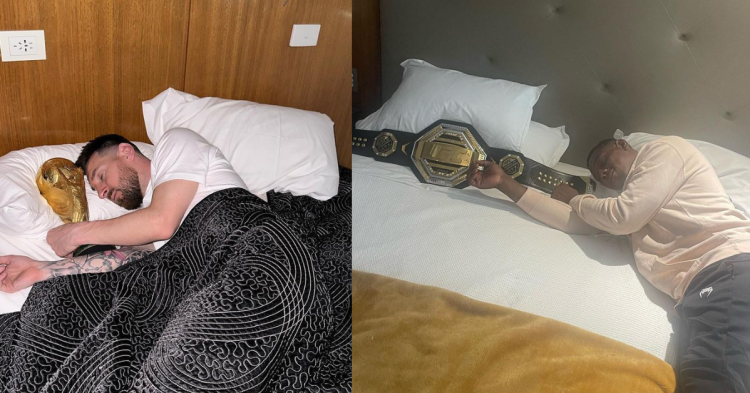 UFC light heavyweight Jamahal Hill recently became the new 205lbs champion. In the main event of UFC 283, Hill took on former champ Glover Teixeira and went toe-toe toe with him for five rounds. At the end of a brutal fight, Hill got his hand raised.

Even before the judges announced the scorecards, Hill’s corner informed him that he likely won the fight. Realizing that he won the fight, Hill appeared emotional before fully breaking down in tears as the title was wrapped around him. Thereafter, Hill delivered a heartfelt speech, having accomplished his dream.

Understandably, Jamahal was a happy man after winning the light heavyweight championship. As such, “Sweet Dreams” took to Instagram, where he posted himself taking a nap next to his title. Unbeknownst to him, Hill ended up recreating Lionel Messi’s viral post after winning the soccer World Cup in Qatar.

“Never saw this before tbh but I understand fully,” commented Hill when he was made aware of the coincidence.

Similar to Hill, Lionel Messi also did the unthinkable and led Argentina to World Cup gold for the first time since 1986. Taking charge in a thrilling 3-3 climax, Messi was instrumental on the night and throughout the tournament. Thus, after the victory, and having completed his collection of all major titles, Messi posted himself going to sleep, with the World Cup trophy next to him.

With his victory at UFC 283, Jamahal becomes the first-ever Contender Series graduate to win a UFC title. In Season 3 of Dana White’s Contender Series, Hill knocked out Alexander Poppeck to earn a UFC contract. After making his way to the UFC, Hill has taken down many big names, truly earning his place at the top.

What is next for Jamahal Hill after UFC 283?

Taking on the veteran Glover Teixeira, many felt that the 31-year-old would be outclassed in all departments. Previously, Teixeira had lost the title to Jiri Prochazka in a very close affair, despite dominating for long periods. As such, few believed that Hill had the tools to truly give Teixeira a run for his money.

Despite all odds, Hill not only outstruck the Brazilian but also showed good improvement in his grappling and ground game. Thus, Hill was more than worthy and sent a clear message to the elite fighters of the division with his victory.

Making his UFC debut in 2020, Hill has been able to claim the light heavyweight title within 8 fights. However, he will now have a whole list of top-level fighters ready to take the title away from him. In case the contenders in his division weren’t enough, Glover’s teammate and UFC middleweight champ, Alex Pereira also seemed as though he wanted to fight Hill as soon as possible.

For the most part, Jiri Prochazka, the former champ is likely to come calling for the title he vacated. Following his recovery, he will be the first candidate for the title shot. If not him, the likes of Jan Blachowicz and Magomed Ankalaev will happily step up for the challenge instead. Although there is no new update on Hill’s next fight, it is understood that he will be making his first defense before the end of the year.

Who will Jamahal Hill fight in his first title defense? What did you make of the Lionel Messi coincidence? Where does Jamahal Hill rank among the top light heavyweights? Leave your thoughts in the comments below.