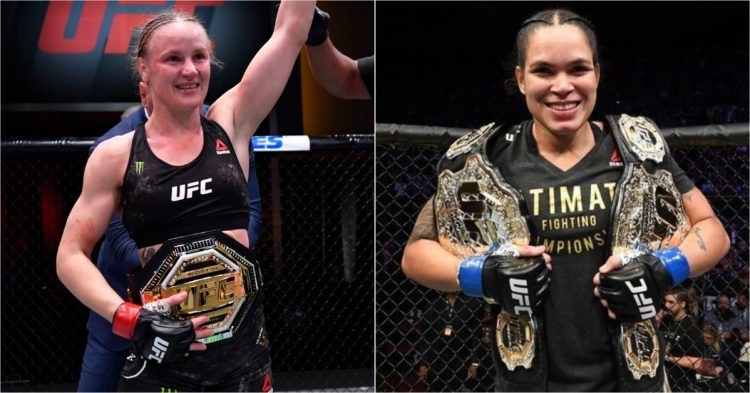 Valentina Shevchenko and Amanda Nunes will both feature at UFC 285. (Credit: Twitter)

After a lengthy break, it looks like the most dominant UFC female champion Valentina Shevchenko will finally find her way back to the Octagon on March 4.

Apparently, Valentina (MMA record 23-3) will fight the 4th-ranked UFC women’s flyweight contender Alexa Grasso (MMA record 15-3). The bout is reportedly set to take place on the main card of UFC 285. The main event of the card will feature Jon Jones vs Ciryl Gane for the UFC heavyweight title.

ANOTHER TITLE FIGHT IS SET

ESPN Deportes reporter Carlos Contreras Legaspi was the first to break the news. The PPV is shaping up to be a surefire blockbuster. But those are not the only two title fights on the card. According to a report from Combate, the reigning UFC bantamweight and featherweight champ, Amanda Nunes will also be on the card. She will reportedly fight Irene Aldana to defend her bantamweight belt.

The UFC is looking to book a second title to #UFC285

Amanda Nunes vs Irene Aldana at 135 for the bantamweight belt pic.twitter.com/RVd5Ja20AL

However, it is yet to be confirmed by the company. Other than the championship bouts, the event will also see the return of UFC prospect Bo Nickal against Jamie Pickett. Shavkat Rakhmonov will be going up against Geoff Neal at UFC 285 as well.

If the two championship bouts do get official, it is bound to be a card for the ages! With some disappointing PPV buy rates in 2022, UFC is stacking up the card to possibly break the 1 million buy barrier.

Valentina Shevchenko beat Taila Santos in her last fight at UFC 275. However, it was not the usual dominant performance from her. Some might even say that she sneaked out a win against Santos. Hence, the bout against Grasso poses an interesting challenge for The Bullet. However, that is not going to stop Shevchenko from wanting to become a double champ.

Before her bout against Santos, Valentina revealed her intentions of grabbing the bantamweight belt as well. So what does the current 135lbs champ have to say about that? After beating Julianna Pena at UFC 277, Amanda Nunes was quite open to the idea of another bout against Valentina. Nunes added, “Good, she is a champion too. That would be awesome.”

But The Lioness also took a cheeky dig at Valentina and floated the idea that Taila Santos was the rightful winner against Shevchenko. Hence UFC 285 would be the perfect stage to reignite their rivalry. If both women win their respective bouts, there is no doubt that one will call out the other. It will also be one of the most exciting female fights in the company for a long time.

What is your take on the matter? Can Valentina avenge her two losses to Amanda? Let us know in the comments down below.