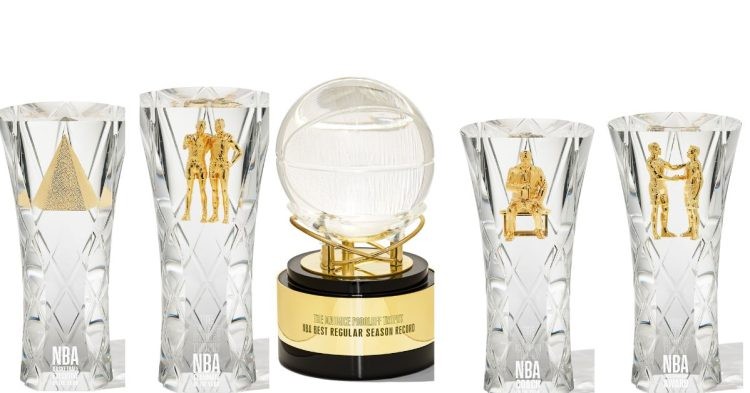 In a seemingly sudden decision, the NBA has decided to launch 5 new NBA trophies. We are already familiar with how these awards work in the NBA. They are usually named after an NBA great. The NBA Finals MVP trophy is referred to as “The Bill Russell NBA Finals Most Valuable Player Award.” This is simply a way to give the Boston Celtics legend his due respect.

There are other trophies associated with NBA players such as the Kobe Bryant all-star game MVP trophy. With that being said, we should wonder what these new trophies are all about, how they came into being and how they will be implemented. Therefore, we need to take a thorough look at them.

The new NBA trophies are designed in partnership with Victor Solomon

NBA fans might not be aware of who Victor Solomon is. He is widely considered the go-to artist for NBA stars like LeBron James and Kevin Durant. His work focuses on designing custom-made pieces of glass floating frames, backboards, and so on. Additionally, he has even collaborated with various franchises for retirement ceremonies.

Recently, Victor has partnered with the NBA and introduced 5 new NBA trophies.

Amusingly, the NBA has pointedly revealed that these trophies are not in partnership with Kia. Therefore, they were introduced as the “new NBA non-Kia award trophies”. However, it is unclear if the name and concept will stick with people.

Let us take a look at what these trophies represent. The Twyman-Stokes Trophy is considered the new NBA Teammate of the Year trophy. Then, the Joe Dumars trophy is for the NBA Sportsmanship award. Next, the Red Auerback Trophy will be presented to the Coach of the year.

Featuring Jack Twyman with his arm around teammate Maurice Stokes, the new NBA Teammate of the Year trophy pays homage to one of the great examples of unselfishness and camaraderie in NBA history. pic.twitter.com/ZUe4HYJrIt

Named for the first winner of the NBA Sportsmanship Award in 1995-96, the Joe Dumars Trophy features two players shaking hands in respect for each other. pic.twitter.com/aVX4RFwaaK

Named after legendary Celtics coach Red Auerbach and presented to the NBA Coach of the Year, the new trophy features the famous Lloyd Lillie sculpture of Auerbach on the bench with game plan in one hand and cigar in the other. pic.twitter.com/qkcNy9wiCz

The iconic 5-sided pyramid on the new NBA Executive of the Year Award symbolizes the 5 players on the floor united, and point toward the apex under the direction of the executive. pic.twitter.com/ZuNC0cJypG

Named after the NBA’s first commissioner Maurice Podoloff, this trophy is presented to the team with the best record after 82 regular season games and features elements that represent the season and both conferences. pic.twitter.com/SRS2Ng7Nux

This news is still very fresh and NBA fans are yet to completely process it. Nonetheless, the responses so far seem positive and encouraging of this new concept.