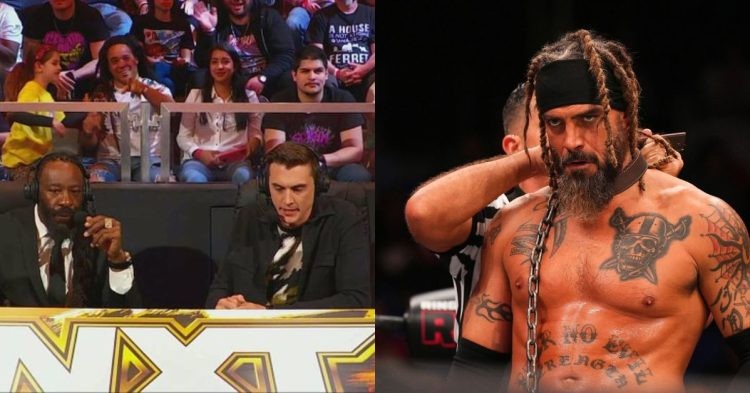 WWE acknowledged the death of Jay Briscoe who passed away in a car accident today.

On Tuesday evening, Jay Briscoe was caught in a tragic car accident. Unfortunately, the tag team champion did not survive the crash. He was 38 years old at the time of his sad death. Tony Khan broke the news on Twitter, stunning fans with the information about the ROH star.

There aren’t many details available right now, but Jay died in a car accident near Laurel, Delaware, according to PWInsider. Although Jay never wrestled for WWE, his death has been felt around the world, and WWE has acknowledged him on the air.

Our thoughts are with the friends and family of Jay Briscoe at this time. pic.twitter.com/D1zyy6VDwK

Vic Joseph said that the wrestling world had suffered a tragic loss. He also expressed his condolences to the Briscoe family. WWE has followed suit, in a rare gesture of the company mourning the passing of someone who did not even work for them.

The wrestling world was shocked to learn that Jay Briscoe had died in a horrific accident. The entire wrestling world has come together to express condolences to everyone affected by the news. Even WWE Superstars have paid tribute to the ROH Icon.

I don’t know what my life would be like without Jay Briscoe in it, and I don’t want to know.

You believed in me, you helped me, you treated me like family. There will never be another like you. I am so grateful to have known a man like you.

I love you Jay.

RIP to the homie Jay Briscoe. Condolences to the your family. Rest in paradise uso.🙏@SussexCoChicken #DemBoyz

Being in the ring with Jay Briscoe got me my first ROH contract. He and Mark being so selfless helped Jimmy and I find our footing as AOTF. Without him, I don’t know if Tyler Black could ever have been Seth Rollins.

I don’t have the words right now to properly convey my sorrow. I love Jay & Mark Briscoe. Always have. I wouldn’t be here without them. I’m very lucky to have shared the ring & shared so many laughs with Jay Briscoe and I’m so sad to know neither will happen again. RIP my friend.

Jay Briscoe was one of ROH’s most decorated wrestlers. He and his brother Mark were 13-time ROH World Tag Team Champions, and he also won the ROH World Championship two times.

The Briscoes also held tag team gold in New Japan, NOAH, GCW, CZW, Full Impact Pro, and several other independent promotions throughout the United States. Their most recent high-profile performance featured a trifecta of critically-acclaimed matches against FTR in 2022.

An incredible performer who created a deep connection with wrestling fans across the globe. My condolences to the family and friends of Jay Briscoe.

On behalf of the @WWENXT community, I would like to express our condolences to the Briscoe family for their loss.

The Briscoes are also members of the ROH Hall of Fame, having been inducted into the first Hall of Fame last year. Jay was also an ROH World Champion twice over.

Briscoe Brothers were widely regarded as one of the world’s top Tag Teams. They established a name for themselves without even working for the world’s largest wrestling promotion, WWE. Jay was regarded as an outstanding performer in the ring and was well-liked by his peers backstage. Briscoe Brothers popularised tag-team wrestling by having memorable matches with FTR, The Rock ‘N’ Roll Express, and others.

We at Sportsmanor express our heartfelt condolences to Jamin Pugh, also known to fans as Jay Briscoe, and his family and friends during this difficult time.