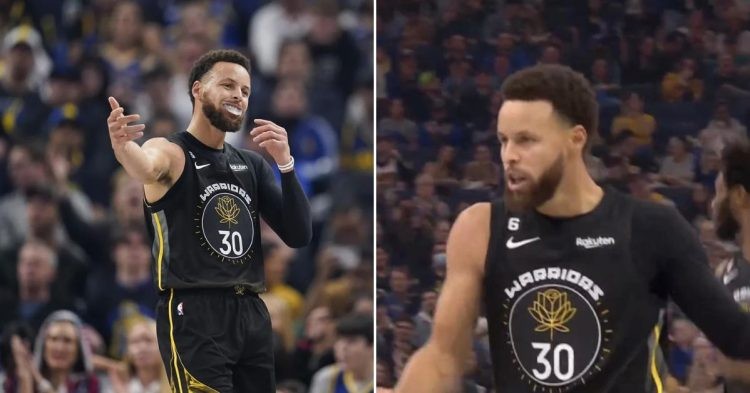 Stephen Curry returned to action recently when the Golden State Warriors played against the Phoenix Suns. He was on the sidelines for quite some time, because of a serious shoulder injury. In his absence, the Warriors have done quite decent, as opposed to what NBA fans expected of them. Despite all this, fans were focused on one more thing; Steph‘s look.

Steph Curry with an arm sleeve looks like a villain 😈

Fans spotted Curry with an arm sleeve, or what looked like a brace for his injured shoulder. It is quite certain some liked it, as one claimed that it was “Ice Cold.”

Some of the community were so impressed by his look that a fan even claimed, “Steph’s villain era is happening.” The tweet indicates that the user believes the 4x NBA champ is going to become a whole new player on the court. If we’re being honest, that would be a scary sight for the NBA, Steph on a good day is a freak of nature, we can only imagine how he would be in his “villain era.”

With that said, some fans hilariously disagreed with the opinion that he looked like an antagonist. A fan wrote, “He’ll never be a villain. Pretty boy of the league.” This reminds us of the GSW star’s nickname: ‘Baby Faced Assassin,’ which has been around for a while now. The reason for that title is pretty self-explanatory, the NBA world believes that he looks like a baby even at the age of 34.

He’ll never be a villain. Pretty boy of the league (goat shooter tho)

Respectfully no it don’t

I literally hope he never wears it again

STOP IT!! Curry never looks like a villain no matter what he’s wearing. pic.twitter.com/JuVgLk6ZKD

Moreover, the way he has dismantled opposition teams into pieces has also earned him the title ‘assassin.’ This would be one of the reasons why people disliked his “look” on the night. Together with that, some even took a shot at his performance for the Warriors against the Suns. One fan pointed out that his FG was just 36%. Stephen Curry put up 24 points, along with 1 rebound and 3 assists.

It is quite evident that these numbers are far off his usual standards, especially when he puts up 35+ points effortlessly. However, they are still quite decent for a player who just returned from a significant injury and did not play for quite a bit.