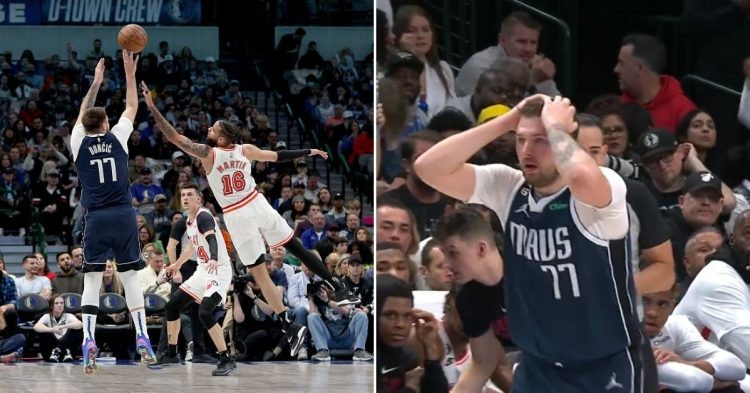 Dallas Mavericks have got a superstar in Luka Doncic. The 23-year-old point guard is having a career season, breaking records left and right, being firmly in the MVP race, and already drawing comparisons to some all-time greats. He’s averaging an impressive 33/8/8 this season, while also topping the league in scoring. For the Mavericks, now is the time to take advantage of Luka’s elite play and make a serious playoff push.

But every superstar has an Achilles heel. For Luka, funnily enough, that might be NBA referees. Doncic has been known to have animated reactions to referees when the calls go against him. The 6-foot-7 Slovenian has been ejected a total of four times in his NBA career and has received a whole lot of technical fouls as well.

Luka expressed his emotions towards these calls again last night, in the game against the Miami Heat. In the 3rd quarter of the game, with Dallas leading Miami by 22 points, Luka was called for a carrying violation as he drove to the basket. Apparently, he didn’t agree at all.

What did Luka Doncic say to the referee?

After the referee called the violation on Luka, he seemed to be in utter disbelief and started appealing otherwise to the referee. Heat veteran Udonis Haslem was also seen signaling Luka to go back and play defense. In the next play, however, Luka did something not many would do.

Luka was called for a carry.

The very next possession, he hit a three and expressed how he really felt 😅 pic.twitter.com/UwYXVHvv9t

While being guarded by Victor Oladipo, Luka stepped back and drained a long 3-pointer over him. He immediately made gestures towards the referee who had called the carry, and also reportedly said, “Carry that!”. The funny thing about this is that Luka had carried again in this play, but the referee didn’t call it. His reaction was an apparent jibe at the inconsistent officiating.

Luka is one of the softest, whiniest players in the league. Obviously a top 5 player but my god such a baby

Fans on Twitter couldn’t keep calm after they saw that footage, as they started calling Luka “The whiniest player in the league” and a “crybaby” over his constant complaining. Another fan wrote, ”He carries every time he gets the ball.”

He carried even worse right before the 3 and that one wasn’t called LMAO.

Luka cries to the refs more than anyone in the league but no one says sh1t about it like they used to about Lebron, Harden, Curry, KD, etc lmao

The number of carrying violations being called on players has certainly increased this season. Many players have even called out the referees for it. Perhaps the league should give more clarification on the violation so that the calls could be consistent.