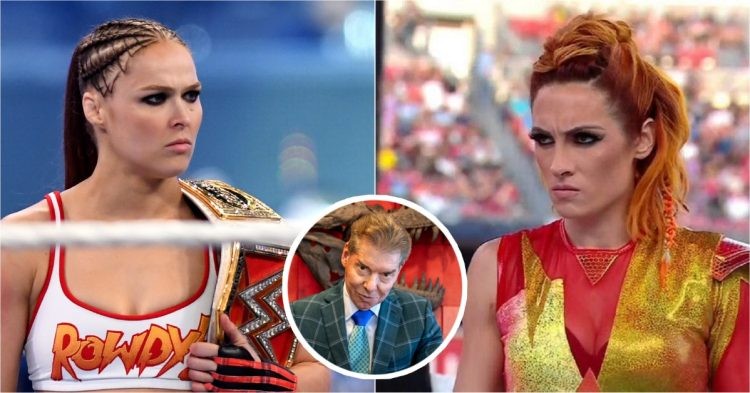 Are Becky Lynch and Ronda Rousey in trouble? (Credit: Twitter)

World Wrestling Entertainment (WWE) is about to go through a historical change! If reports are to be believed, the company has been sold to Saudi Arabia’s Public Investment Fund. There were rumors for a number of months that WWE was positioning itself for a sale. However, those plans were on the back burner after Vince McMahon resigned from the company last year.

Vince McMahon walked away from WWE when multiple sexual harassment allegations emerged against the former CEO. After that, his daughter Stephanie McMahon took over his role. Alongside Stephanie, Triple H looked over the creative department of the company. Triple H also decided to bring back some of the wrestlers who were let go by Vince.

Under Triple H, multiple divisions, including women’s wrestling, flourished. Superstars like Charlotte Flair, Becky Lynch, and the former UFC champ Ronda Rousey, all enjoyed success. Recently Flair returned and beat Rousey to win the WWE title. Becky Lynch, on the other hand, is also thriving under the creative team. Hence, fans are afraid that the recent developments may impact the division.

Current WWE stars like Sami Zayn are strictly against the idea of WWE holding events in Saudi Arabia. Hence, Zyan even skipped WWE’s latest Saudi show. Even women were not allowed to wrestle until very recently. Hence there is a lot of apprehension among the fans about the future of the promotion.

Not entirely. But now that Saudi owns it, you’ll see more shows over there and less and less female talent being involved. You’ll also see an influx of part timers as champions. Goldberg somewhere is smiling ear to ear.

Under a WWE Saudi Arabia regime. Prepare to see all your favorite female wrestles covered from head to toe. Prepare to see them told how to act, and talk in ways that you've never seen them before. This will be a disaster if all this news is true. pic.twitter.com/iDPfWzex8D

Sami Zayn, Kevin Owens, Mustafa Ali and MVP are all more than likely gonna walk. Can't imagine that any female wrestlers are all too happy either

I feel for the LGBT and Female wrestlers in WWE no because of this Saudi Arabia Deal.
And for those like Sami Zayn with backgrounds that'll cause issues with Saudia Arabian Authorities.

I hope they all stay safe and are protected at this time.

Woke up to news that WWE has confirmed their sale to a Saudia Arabian Investment Fund.
My thoughts are with the tallent who will be greatly affected by this sale, especially the female superstars who have been nearly excluded from participating in events in the country.

In 2019, WWE hosted a female wrestling match for the first time on Saudi Arabian soil. The match featured Natalya and Lacey Evans. Although female wrestlers have performed in Saudi Arabia since then, it was always somewhat restrained. Wrestlers had to wear special ring gear to cover themselves up. Hence, the concern from the fans is justified.

Even Ronda Rousey herself is unsure of what the future holds for her. In a recent YouTube stream, Ronda added, “If you haven’t noticed, everything’s a little bit in flux with the WWE right now. I don’t think anybody knows what’s going on with anybody this week, let alone weeks from now.” (h/t via Ringside News)

The WWE sale is huge news as the wrestling promotion is a massive worldwide brand. Steven Muehlhausen reported on the news initially. Following the DAZN reporter’s news, Cassidy Haynes provided some much-needed clarification on the news. According to him, WWE’s deal with Saudi Arabia is not signed yet. Apparently, they have a deal in principle.

So fans will have to wait for an official announcement from WWE to confirm the sale. At present, WWE is a publicly-traded company. Hence all of their stakeholders will have to be notified of the sale before the paperwork is done. That brings the attention back to Vince McMahon’s return. McMahon is the biggest WWE shareholder.

Following the controversial return of Vince McMahon to the WWE as Executive Chair, his daughter Stephanie McMahon announced she is officially resigning as Co-CEO. pic.twitter.com/bhbUnAS3F7

Hence, McMahon’s involvement in the matter was absolutely crucial. As the initial report suggests, WWE will become a privately traded company once more. So there is a chance that Vince returns to the company as the CEO. Rumors had it that the 77-year-old wanted to be involved in the company once more. The opportunity came up once Stephanie stepped down.

Vince returned after the WWE Board of Directors chose him as Stephanie’s successor. But, will he remain in the post if and when the company gets sold officially? Only time will tell.