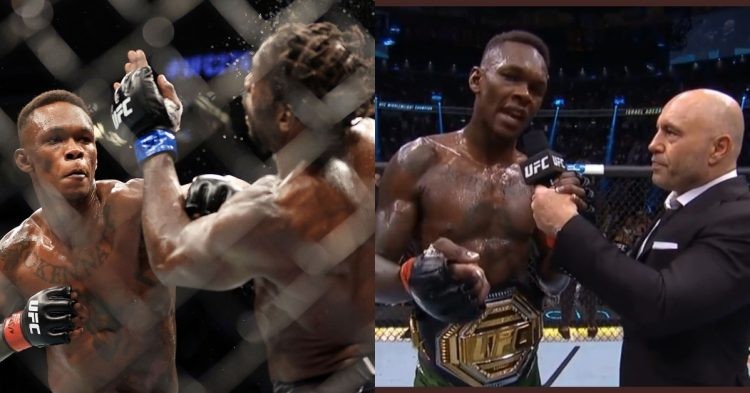 UFC middleweight champion Israel Adesanya returned to action to defend his title against Jared Cannonier in a five-round main event fight at UFC 276 that took place in a full house T- Mobile Arena in Las Vegas.

With five title defenses to his name after outclassing Robert Whittaker in his last fight, The Last Stylebender clashed against the dangerous Killa Gorilla who knocked out Derek Brunson in his last bout to become the number one contender. By looking at the demeanour during the build-up, both Izzy and Cannonier were high on confidence as they predicted to finish their rival.

Therefore it is needless to say that fans were expecting a violent war between these two striking giants. However, it was more of a technical fight than an all-and-out power striking. The Last Stylebender outstriked Jared Cannonier throughout the five rounds to defend his belt via unanimous decision.

Just like in every other of his fights, Israel Adesanya took time to read his opponents movements in the first round and took a cautious approach. The Killa Gorilla landed some good calf kicks meanwhile, Izzy went for the body shots. In the second round, Adesanya upped the ante and landed some good jabs and mixed it up with his kicks.

He used his reach advantage and outstriked Cannonier with his jabs to get an upper hand in the second round. Adesanya’s defense was on point in the third and fourth rounds as Cannonier tried to explode and look for the big finish. In the end, Adesanya’s jab-heavy approach along with his trademark kicks was enough to get the job done.

Israel Adesanya outclassed Jared Cannonier with his brilliant striking and successfully defended his middleweight title for the sixth time. The Last Stylebender has nearly wiped out the entire division and consequently, UFC commentator Joe Rogan asked Izzy who he would like to face next.

The middleweight champion demanded a fight against Alex Pereira after his left hook knockout win over Sean Strickland earlier at UFC 276. Adesanya also vowed to avenge his kickboxing knockout loss inside the UFC octagon and sent a stern warning to Pereira.

“The first time I told you it was error on my part for spamming right hand and that was in kickboxing. It’s easy to knock out homeboy what’s that hilly billy’s name. Because he was parrying the jab, but like I said at the press conference next time I put you on the skates you’re gonna get frozen like Elsa. I’ll leave it at that.”

So far Adesanya has faced no troubles in the middleweight division and has swept the floor with his opponents. However, the same could not be said for his next matchup as Alex Pereira is one of the most dangerous knockout artists in the 185-pound division. Moreover, he is the only one who has finished Izzy. So it would fascinating to see who comes out on top in this matchup.