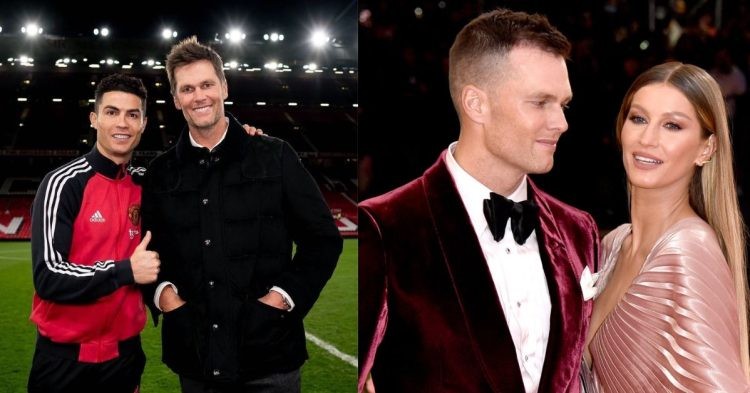 Longevity has always been admired in the sport of football. In the history of the beautiful game, there hasn’t been a bigger example of longevity than Cristiano Ronaldo. Since making his debut it 2003, he has been at the top of the game. That adds up to 20 years of experience at the highest level.

Ronaldo has scored over 800 career goals over time and he’s just one away from netting 700 in his club career. The last few months have been tough. However, it doesn’t really mean he hasn’t been effective for Manchester United. Last season, he single-handedly won United many games.

One of those games were against Tottenham Hotspur, when Cristiano scored a sensational hat-trick at the Theatre Of Dreams. Out of the 3 goals he scored that day, one was a long-range screamer that really brought nostalgia for the fans. However, Ronaldo’s historic performance wasn’t what caught the attention of fans.

After the conclusion of the 2021 season, NFL legend Tom Brady announced his retirement. He bid goodbye to a legendary career filled with 7 Super Bowl wins. The NFL world often addresses him as the GOAT of the sport. After his retirement, he showed up to Old Trafford for the United’s match against Spurs.

He witnessed one of Ronaldo’s greatest performances with his own eyes. To many fans’ disbelief, Brady announced to the world he was coming back from retirement just days after. Many claimed that he saw Ronaldo ball out on the pitch and realized he still had more to give. But the issue with Brady’s comeback was that his wife, Gisele Bundchen, was unhappy about the decision.

According to several reports that have emerged recently, Brady’s decision to prioritize football over his family has put his marriage at jeopardy. The couple may have thought about divorce in the past, but they have decided to go for it this time around. Once the news broke out that football was the main reason why Gisele wanted to get a divorce, Twitter started filling up with fans who believe Ronaldo is responsible for it.

Tom Brady should have followed the Cristiano Ronaldo playbook of dating supermodels.

You never much about his family life interfering with his career 😂

One fan tweeted, “Tom Brady should have followed the Cristiano Ronaldo playbook of dating supermodels. You never much about his family life interfering with his career.” For context, Ronaldo has had his fair share of drama with supermodels in the past. One of the most notable names would be Russian model Irina Shayk. The former couple had a public relationship before their split.

Another user wrote, “Tom is domestic…Gisele is global. It’s not like she was married to Cristiano Ronaldo. It’s just Tom “American” Brady.”

Tom is domestic…Gisele is global. It’s not like she was married to Cristiano Ronaldo. It’s just Tom “American” Brady. https://t.co/81XCtIvJZr

The fan seems to take a dig at Brady, claiming that his wife is more famous and well-known around the world than him. In addition to that, he also mentioned that it was not like she was married to Cristiano Ronaldo, who is indeed a global icon.

The tweet that has caught the attention of many would be one that claims the 7x Ballon d’Or winner destroyed Tom and Gisele’s marriage. It said, “Tom Brady went to watch that game Cristiano Ronaldo scored a hat-trick against Tottenham and gave up on retirement Now he separated from his wife because she wanted him to retire to dedicate more time to his family. Cristiano Ronaldo destroying relationships”

“According to The Sun, Cristiano Ronaldo was the culprit in the divorce of Tom Brady and Gisele Bündchen. The NFL player saw Cristiano’s hat-trick over Tottenham, and felt that it was still possible to go on. This angered the model,” tweeted another user.

It seems like the majority of the NFL world is pointing the finger at Ronaldo for being a deciding factor. Brady is 45 years old right now, and he still wishes to go ahead with football. But his wife hasn’t been on the same page which has eventually led to their divorce. Now, CR7 may have helped Brady realize that he still has some more to give for the sport but to blame him might be too much of a stretch.