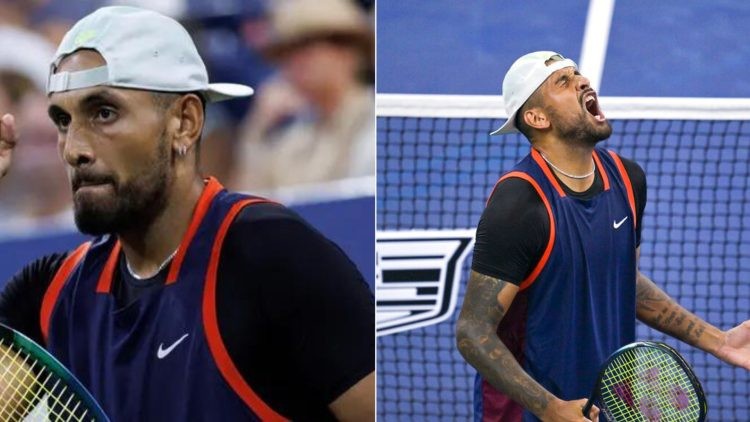 Nick Kyrgios, you either love him or hate him, there is no middle ground. Nick, often considered to be the self-proclaimed bad boy of the tennis fraternity has landed in several controversies including unsportsmanlike behaviour and an alleged assault charge against his ex-girlfriend as well.

The Wimbledon runner-up was fined multiple times for his unruly behaviour during the Wimbledon as well. It seems that he has landed himself back in trouble in the ongoing US Open.

During his second-round match against Benjamin Bonzi, things got a bit heated and Nick was witnessed cracking under pressure yet again. Even though he won the closely poised match with a 7-6(3), 6-4, 4-6, 6-4 win he was clearly riled up.

He was warned after he used obscene language on someone inside his own box. He was asking the person to be a bit more supportive or leave the court for good. The Australian loudmouth also complained to the umpire that he could smell marijuana during the course of the second set.

The entire tennis world has united to condemn the actions and the unruly behaviour of Nick Kyrgios during his match against Benjamin Bonzi during the 2022 US Open. Tempers flared up between Nick and the members of his own box as he started yelling at them and his team. His exact words were,

He just says and spells and understands “spectators” as “spit takers.”

He’s good for the sport, because he’s respecting its heritage as a melting pot of the world’s languages.

He was also witnessed spitting toward his team which led to a lot of criticism from the fans of tennis across the world. They said,

He spat at a fan at Wimbledon and there was barely a ripple. It’s kind of crazy. He not only gets away with it, but is promoted like he’s the best thing ever.

Fans were disappointed that he was spitting on one of the most prestigious tennis courts and that to towards his own team.