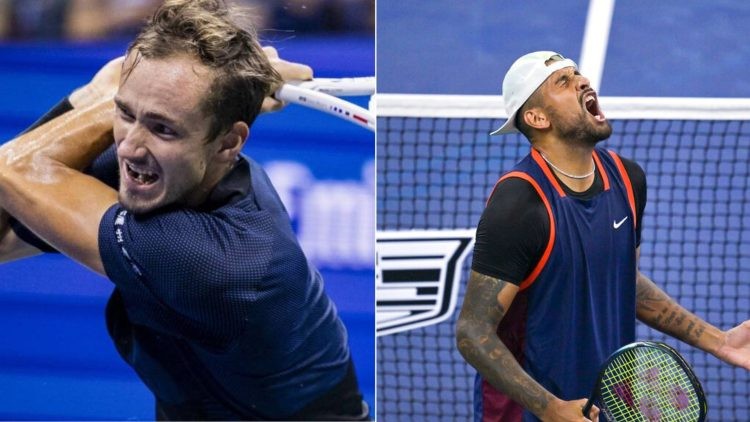 Daniil Medvedev was stunned by a fired-up Nick Kyrgios, who defeated him in order to progress to the quarterfinals of the US Open.

The match concluded with a 6(11)-7(13), 6-3, 3-6, 2-6 scoreline in the favour of Nick Kyrgios. Daniil Medvedev had a lot at stake since he was not only fighting to defend his US Open title, but also his No.1 spot on the ATP rankings which seems to be lost from his hands now. In the post-match conference, Daniil further stated,

“He played good. It was really even till the 3rd set. I started to feel worse physicaly. I felt sick today. I get sick at least once a year during the USA swing cause the air conditioning here is just crazy. Last year it was in Cincinnati, this year here”

He also commented that the match was on a very high level, and even though Nick has a completely different game he played on the level of Rafael Nadal and Novak Djokovic. Daniil felt that if he keeps up with this level, Nick has a good chance of winning the title. Daniil was stunned by the pure variety of shots Nick would throw at him.

Will Daniil Medvedev lose his World No.1 spot?

Daniil Medvedev will most definitely lose the ATP World No.1 spot to either Rafael Nadal, Carlos Alcaraz or Casper Ruud. Rafael Nadal would become the World No.1 if he reached the finals of the US Open, or even if he loses in the quarterfinal or the semifinals, both Ruud and Alcaraz do not win the US Open.

Carlos’ and Ruud’s No.1 spot depends on Nadal’s failure to reach the finals. Among all of these one thing is sure, Daniil would be losing the famed No.1 spot by the end of this tournament.

Medvedev reflected on this and said that he does not know to which spot he would be falling and even expects that Carlos passes him in the rankings since he did not play good enough to defend his ranking points.

“I Want to Go All the Way”- Nick Kyrgios Shocks the World No 1 Daniil Medvedev, Aims to Win the US Open 2022