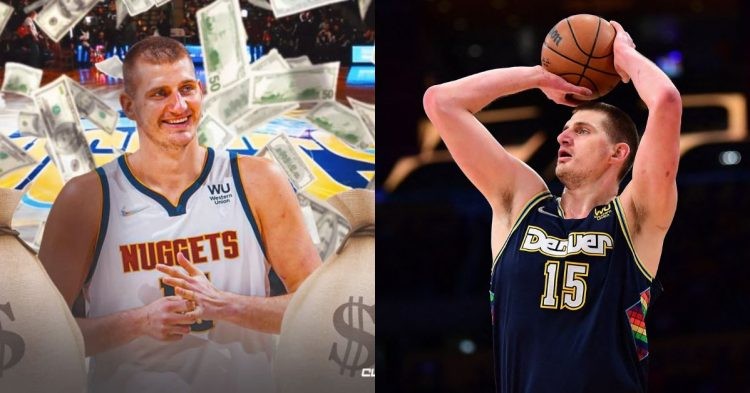 After Nikola Jokic became the 12th player ever in the history of the NBA to win back-to-back MVPs. he is set to be awarded a record-breaking deal. Jokic has agreed to sign a 5-year $264 million extension with the Denver Nuggets.

This is the biggest contract that anyone has ever gotten in the NBA. In his last year, he will have a player option worth a whopping $60 million.

Nikola Jokic has agreed to a five-year, $264M supermax with the Nuggets, per @ShamsCharania

One might ask, what has he done to be awarded the biggest contract ever. The answer is quite simple. Jokic and Jamal Murray have done wonders for their team, taking them to the Western Conference finals and overcoming two 3-1 lead in just 1 playoff run.

Jokic has now carried a hobbled Nuggets to the playoffs 2 straight years. Without any real help in the 2021-22 season, he won 48 games and placed 6th seed in a loaded Western Conference.

The Serbian brought 2 MVPs to the franchise. His name will surely end up in the rafters. However, the only thing to achieve in his career is an NBA Championship.

Nikola Jokic is one of the best players in the league. He has proved it by winning back-to-back straight MVPs. It is a feat only accomplished by 11 players, with Nikola Jokic being the 12th player in history.

He is one of the greatest if not the greatest passing big man the league has ever seen. Jokic for the season averaged 27 points, 13.8 rebounds, and 7.9 assists on 62% shooting from the field and 81% from the charity stripe. He even recorded the highest PER ever with 32.85 surpassing Wilt Chamberlain.

Giannis Antetokounmpo is another European player who has continued to cement his dominance in NBA. With 1 championship and 2 back-to-back MVPs, he has one of the largest contracts in the NBA worth $228 million over 5 years. The Greek Freek average in the 2021-22 season stands at 30 points on 61% shooting, 11 boards, and 6 assists.

This brings us to the most exciting young talent from Europe, Luka Doncic. He dominated the Euro League and now is dominating the NBA. At just 23 years of age, he bagged a contract extension worth $207 million over 5 years.

It certainly looks like the league in the future is in the hands of European players. They have 3 out of the 5 biggest contracts in the NBA. It won’t be a surprise if in the future the top paid players are from outside of America.