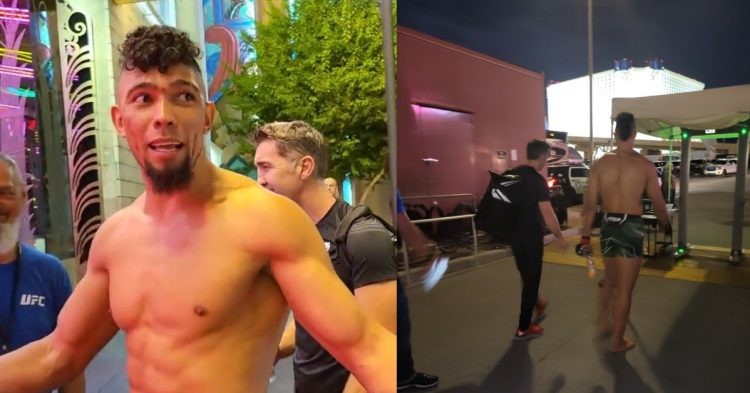 Light heavyweight contender Johnny Walker stepped inside the octagon to kick off the UFC 279 main card as he squared off against Ion Cutelaba in a three-round bout that took place at the packed T-Mobile Arena in Las Vegas.

Leading into the matchup, Walker was on a two-fight losing skid and everyone were expecting Ion to outclass him. However, Johnny Walker stunned fans all around the world as he submitted Cutelaba with a rear naked choke in the first round of the fight.

Surprisingly, after winning the fight, Johnny Walker along with his coach John Kavanagh was thrown out of the T-Mobile Arena by the UFC security. His coach Kavanagh shared a tweet where he expressed his frustration after not being able to stay backstage and watch the rest of the fights on the main card.

So @ufc just came and kicked us out. No tickets for us and not allowed stay back stage to watch. Pulled out back door, kicked out, no even shoes on 😅 pic.twitter.com/av78OBETZM

Kavanagh also posted a video where he commented on the entire situation after Johnny’s win over Ion Cutelaba. “So here we are back at the hotel. Johnny still has his gloves on. Didnt get a chance to change.”

In the video, Johnny Walker was furious and he said “They kick me back to the hotel like win the fight, come back motherf****r.”

This is a unique situation given that the UFC fighters and their coaches are allowed to stay back after the fight and enjoy the PPV. Do let us know in the comments section your thoughts on Johnny Walker getting kicked out after his fight.

Soon after John Kavanagh posted a series of tweets describing the entire incident how he and Johnny Walker were forced to leave after their UFC 279 fight, Derek Brunson replied to the tweet and trolled the SBG Ireland coach.

No Conor no vip 😂

Following this incident, UFC President Dana White was questioned as to why Walker and John Kavanagh were not allowed to watch the rest of the fights. Dana reacted to it and said that he is not sure why that happened.

This is a unique situation given that UFC fighters and their coaches are allowed to stay back after the fight and enjoy the PPV. Do let us know in the comments section your thoughts on Johnny Walker getting kicked out after his fight.