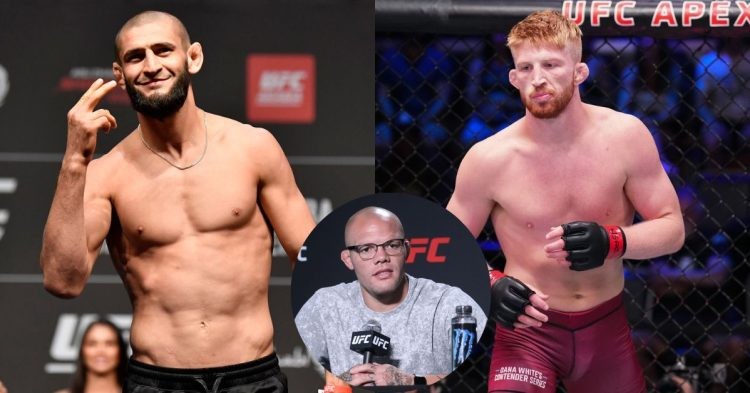 Khamzat Chimaev has been unstoppable since making his debut in the UFC in 2020. The Borz has won all six of his fights and has pretty much dominated most of his opponents. A few days ago, rising middleweight prospect Bo Nickal called out Chimaev for a fight and claimed that he would easily defeat him.

UFC light heavyweight contender Anthony Smith has backed Nickal to beat Chimaev and has made a bold statement that the middleweight prospect would annihilate the Swedish fighter. He even went one step further and said that no Russian fighter in the promotion can outwrestle Bo Nickal.

“He will ragdoll Khamzat in a wrestling match. It wouldn’t even be competitive, he’s that f***ing good. There’s not a Dagestani/Russian wrestler in the UFC that’s gonna beat Bo Nickal. I don’t even care what weight class you say it is.”

It is needless to say that Bo Nickal is highly skilled when it comes to wrestling. But Chimaev is no stranger when it comes to dominating opponents on the ground and is extremely dangerous with his arsenal of submissions. With that being said, it would be a highly exciting matchup to watch as both the fighters are elite.

However, the American middleweight prospect has a lot to prove before getting an opportunity against a top fighter like Khamzat Chimaev. Besides, The Borz wouldn’t be interested to face Nickal as he aims to win a title and he will most likely face a top-ranked middleweight contender in his next fight.

Who will Bo Nickal face in his UFC debut?

Bo Nickal made a statement last week that he is levels above the competition after he submitted Donovon Beard in the first round in his last fight at the DWCS. With this victory, Nickal has earned the UFC contract and there were already rumours surrounding his next opponent.

As per sources, Bo Nickal is scheduled to face middleweight contender Jamie Pickett at the UFC 282 PPV that will take place on December 10th in Las Vegas. Pickett is currently going through a sluggish phase and has lost his last two fights.

Given the debutant’s skill set, we can expect fireworks from him and an impressive showing at UFC 282. Do let us know who you think will win this matchup between Jamie Pickett and Bo Nickal.