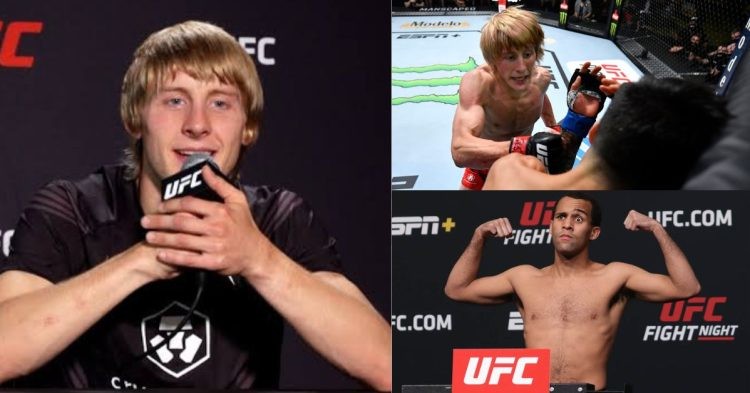 Paddy Pimblett will make his octagon return this weekend as he takes on Jordan Leavitt in a three round bout that will take place on the main card of UFC London: Blaydes vs Aspinall. This event will commence on July 23rd at the O2 Arena in London, United Kingdom.

It is needless to say that all eyes will be on Paddy the Baddy in this event as he is a fan favourite. Moreover, with him competing in front of his home crowd, we can expect all the fans in the entire O2 arena to cheer for him as he steps inside the octagon. As we lead up to this lightweight clash, Paddy Pimblett sat down for the UFC media interview.

He answered several questions related to his upcoming matchup and also revealed his gameplan for this fight. Pimblett didn’t mince his words as he blasted Jordan for his pre-fight comments.

Thereafter the interviewer asked Paddy whether this matchup will turn out to be a grappler vs grappler fight as said by his opponent Leavitt. Paddy disagreed and vowed to not attempt any takedowns in this fight.

As soon as Paddy Pimblett sat down for the UFC London media interview, he expressed his anger towards his upcoming opponent Jordan Leavitt. The Liverpool native was unhappy with Jordan’s comments on sandbagging in his previous interviews and coined it as distasteful.

Paddy the Baddy also confessed that Jordan Leavitt is the first fighter who he hates and consequently, vowed to knock him out and make a statement at UFC London. “I’m gonna make a statement on the weekend know what I mean. I can’t wait to come out and absolutely flatline him. I’m gonna put him unconscious.”

This is the first time that Paddy Pimblett is so fired up ahead of his fight and one could say that this is due to the pre-fight banter by his opponent Jordan Leavitt.