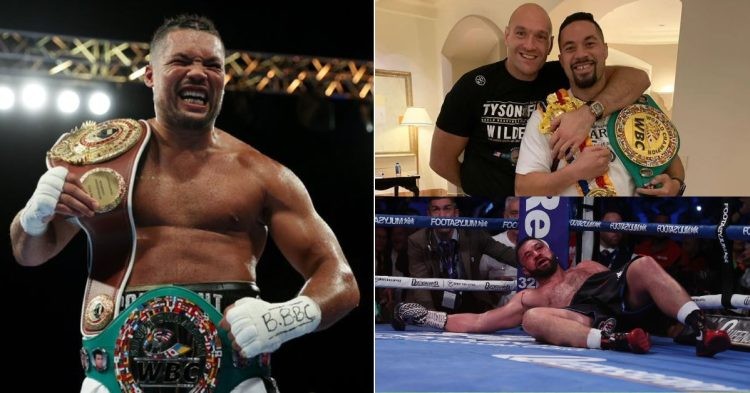 Joe Joyce became the first boxer to hand a stoppage loss to Joseph Parker after he knocked him out in the eleventh round with a brutal left hook. It’s interesting to note, at just 30 years of age, Parker has fought the best of the best that the heavyweight division has to offer.

Having fought the likes of Dillian Whyte, Anthony Joshua, Derek Chisora, and Andy Ruiz, among others, Parker is already an established superstar. With the victory, Joyce is now the interim WBO heavyweight champion of the world, and it’s safe to say, we could see him challenge for the title next.

In what was a gritty affair between both the boxers, Joyce once again emerged on top as he secured his fifteenth straight win inside the ring. The stoppage win also marked his 14th career stoppage, with only one fight going the distance in his professional boxing career.

A former Olympic silver medalist, Joe Joyce is slowly capturing the attention of boxing fans around the world. Despite a stellar outing every time he steps inside the ring, Joyce is incredibly underrated and deserves a lot more attention and praise.

Tyson Fury and Joseph Parker are close friends. The Gypsy King was present ringside as Parker took on the defiant Joe Joyce and what followed was an 11-round carnage that saw both the boxers put up a performance of a lifetime for the fans present inside the AO Arena in Manchester, England.

Chin on the Juggernaut is insane 💯 pic.twitter.com/oZGAgOcqpV

Tyson Fury, who was quite evidently upset after Parker’s loss, did not fail to praise Joe Joyce. However, the good words did not come without some harsh criticism from the Gypsy King. Speaking to the media backstage, here’s what Fury had to say after the conclusion of Joe Joyce vs Joseph Parker.

“It’s boxing, and you win some, you lose some. The bad man won on the night. Joe Joyce was the bad man tonight, Joe Parker tried his heart out, wasn’t good enough and that’s boxing.”

“Joe is a good man. It has changed me impression of him. I know he is big and strong, and he is gonna come forward. So yeah, he’s a good fighter.” He said.

“I will fight anyone if the money is right.” “No, it will be very one-sided. I would hit him 52 times before he spun around in a circle.” Fury further added on the possibility of fighting Joe Joyce and how it goes if they ever share the ring.

Who is next for Joe Joyce after victory over Joe Parker?

Joe Joyce is now the interim WBO heavyweight champion of the world, making him next for the WBO undisputed championship. As it stands right now, Oleksandr Usyk stands tall as the unified heavyweight champion and it’s safe to say that we could see both these stalwarts meet each other inside the boxing ring at some point.

Joyce has also expressed his interest in fighting Tyson Fury, while Deontay Wilder is also an exciting option for the Juggernaut. Who do you think he will fight next?