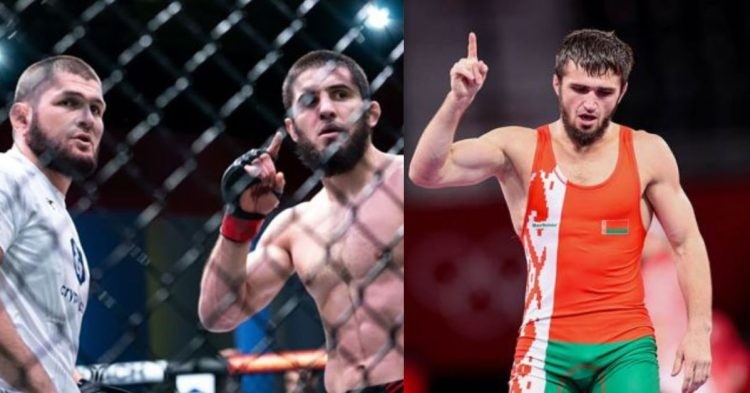 Islam Makhachev is all set to get back in action this month on October 22nd as he takes on Charles Oliveira for the lightweight title in the main event of UFC 280. This highly anticipated title bout is scheduled to take place at the Etihad Arena in Abu Dhabi, UAE.

Along with his coaches and sparring partners, The Russian lightweight reached UAE a few weeks ago to get acclimatised to the conditions and to train for this fight. Makhachev is preparing for this title fight with former lightweight champion Khabib Nurmagomedov.

Meanwhile, a week ago, Charles Do Bronx was seen training with Kyle Dake who won the bronze medal in wrestling in the Tokyo 2020 Olympics. It is needless to say that Oliveira is taking special measures in order to tackle Islam’a grappling prowess.

However, the Brazilian contender is not the only fighter who is taking special training for this fight as Islam Makhachev is also practising with Kadimagomedov who has an excellent wrestling background.

Kadimagomedov is a training partner of Islam Makhachev. Oliveira is in for a rude awakening pic.twitter.com/8kZ5mV8pcX

The Russian lightweight contender is sharpening his tools to get the better of Charles Oliveira who is a big threat on the ground. With that being said, both the lightweights are highly skilled fighters and it would be interesting to see who reigns supreme and wins the belt at UFC 280.

Who is Magomed Kadimagomedov the new training partner of Islam Makhachev?

As mentioned above Kyle Dake who is helping Charles Oliveira prepare for his fight is a renowned wrestler. However, Magomed Kadimagomedov who is assisting Islam Makhachev got the better of Dake when the two clashed in the quarter-finals of the Tokyo Olympics and thereafter he went on to win the silver medal.

In the released footage, The Russian lightweight was looking great as he landed a beautiful takedown to control the Olympic silver medalist on the ground. One can expect Islam’s game plan for this fight to control Oliveira on the ground as he is the better wrestler.

However, it will be very difficult to dominate Oliveira on the ground as he is a very tricky opponent with dangerous submission skills. Nonetheless, fans can expect a stellar contest between two of the best lightweights in the entire UFC.