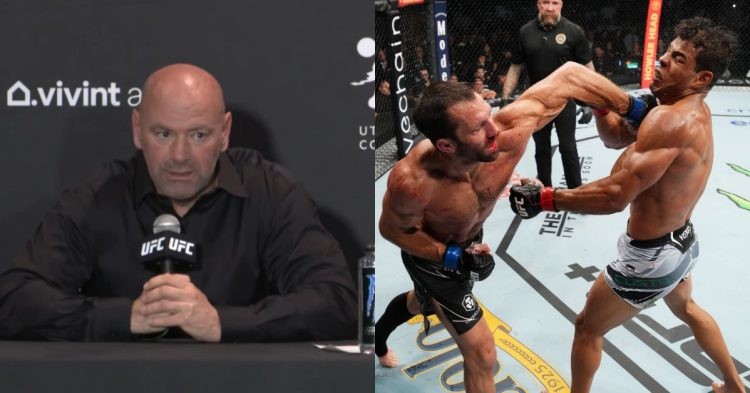 Former UFC champion Luke Rockhold fought Paulo Costa at the recently concluded UFC 278. Although Costa won the fight, the bout exceeded expectations and delivered quality entertainment for the fans. The contest was awarded the ‘Fight of the Night’ and Rockhold retired from the sport after the loss.

Heading into the event, Luke certainly had a lot to say. He was unhappy regarding the lack of health care for the UFC fighters. Rockhold also expressed his frustrations about the lack of fair compensation from the company. But perhaps the biggest accusation he made, was against UFC president Dana White. Luke stated that Dana was oppressing the sport.

Luke’s claims were so severe that even the UFC shied away from posting his press conference on their official YouTube page. So it was interesting to see how Dana would react to the former UFC champ’s comments.

But to everybody’s surprise, White had nothing bad to say about Luke Rockhold. Dana stated that Luke’s comments were made due to the pressure of the fight week.

“He is entitled to his own opinions and his own you know, whatever it is that went on this week.”

“But let me tell you what, I’ll never say anything about him, I totally respect him and after that war tonight, normal humans like us that are sitting in this room have no idea what those two went through tonight in that Octagon and we never will, thank f****g God.”

The bout between Luke Rockhold and Paulo Costa was a 3 round bloodbath. There were concerns regarding both of their physical conditions before the bout. While Luke suffered 3 horrible losses in his last few fights, Costa was unable to make the weight in his last fight. However, both fighters put the doubts to rest as they came in tip-top shape for the fight.

Because of it, the fight ultimately turned out to be one of the best bloody wars in UFC history. Neither Costa nor Rockhold backed down in the contest and duked it out till the last second. Rockhold deserves a lot of credit for not giving up despite being horribly exhausted.

Costa bloodied and battered Luke throughout the fight. But Luke stayed in the contest and fired back at Borrachinha. But it was evident that the 37-year-old did not possess the same drive that he did 6 years ago.

Fans wondered whether he would call it quits after the 6th career defeat or not. Rockhold seemed to think about the same thing as he told Joe Rogan that he was done with the sport.

Rockhold is a one-time UFC champion and a one-time Strikeforce champ. He was considered the best 185lbs fighter in the world for a brief period of time. So Luke has already achieved incredible heights in his career.

Luke also has a modelling career outside the cage which has been lucrative for him. So stepping away from the cage will definitely allow him to pursue that without getting punched in the face.