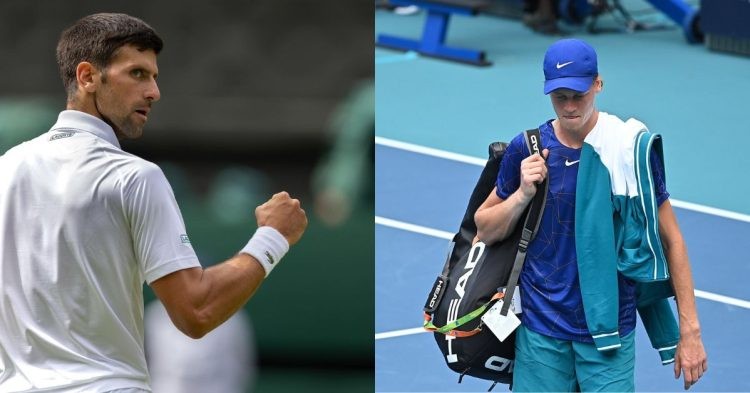 Novak Djokovic played his toughest match of Wimbledon so far when he faced Jannik Sinner in the quarterfinal. Everyone expected Sinner to put up a brave fight. However, no one might have predicted for him to almost knock out Djokovic from the tournament.

One set away from the semi-finals. There’s no stopping @janniksin on Centre Court#Wimbledon | #CentreCourt100 pic.twitter.com/LWBGl5iK4o

Djokovic took a comfortable start as he broke his Sinner’s serve early in the first set. At one point, the Serbian was leading 4-1 in the first set. However, that is when Sinner unleashed the beast inside him. He came from behind to win the set 7-5.

The momentum completely shifted to Sinner’s side as Djokovic was suddenly on the receiving end. Sinner capitalized on the momentum to take the second set home. He won the second set 6-2, needing only one more set to make it to the semifinal.

Just when it looked like Sinner was about to cause the biggest upset of the tournament, Djokovic came back to his old self. He started dominating the rallies from the baseline and turned the third set in his favor. Sinner’s serve started to weaken as Djokovic won the set 6-3.

This is how champions play 💫

Over to you, @DjokerNole… #Wimbledon | #CentreCourt100 pic.twitter.com/fn5KXfpxUo

There was still hope for Sinner as he needed only one set to win while Djokovic need two. However, this is when Djokovic’s experience overpowered the 20-year-old. The 20-time grand slam champion broke Sinner’s serve twice to win the set 6-2.

By this time, the momentum had completely shifted back to Djokovic. Moreover, Sinner looked tired and was making a lot of unforced errors. However, everyone expected a nail-biting fifth set. Little did Sinner fans know that Djokovic was only getting started.

Djokovic did not give any chance to Sinner breaking him early on in the fifth set. After that, it felt like his job was more or less done. Djokovic went on to break Sinner’s serve again as the score read 5-2. Serving for the match, Djokovic wasted no time and won the set within no time.