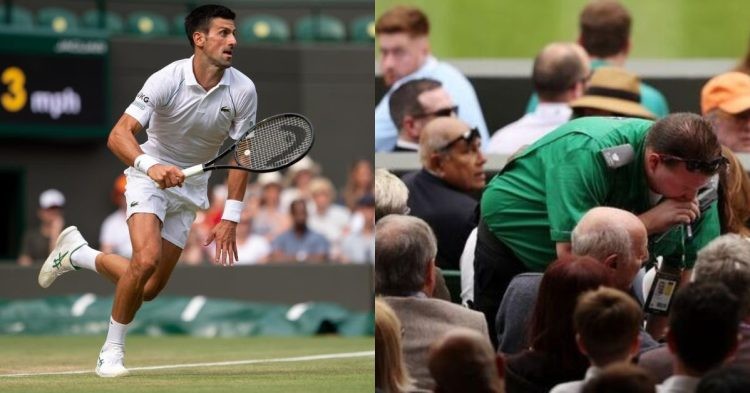 Novak Djokovic has seen played many Wimbledon matches by now but nothing compares to his first-round match of Wimbledon 2022. He was serving walking on to serve in the second set when the play got suspended due for the first time.

Djokovic match suspended due to medical emergency as fan in crowd taken illhttps://t.co/0vAH7QJe4E

One of the spectators in the stands got ill and a medical team of four immediately came to assess the situation. Djokovic and his opponent Kwon Soon-woo went back to their seats till the situation came under control. The entire episode suspended the game for five minutes.

It seemed like that was the first and last time it would happen in the match. However, another incident happened in the same set. Another spectator got ill when Soon-woo was serving. However, this time the play was suspended for a shorter duration. The players did not retreat back to their seats and the play was resumed quickly.

Novak Djokovic avoids scare to advance to the second round

Djokovic did not look his usual self as he struggled a bit against unseeded Kwon Soon-woo. He dropped his serve in the first set but eventually won it 6-3. It finally looked like the Serbian was in control but that was certainly not the case.

Soon-woo fought hard to win the second set 6-3. It was shocking to see Djokovic drop a set in the first round itself. However, he finally powered through to win the next two sets 6-3, 6-4.

After the match got over, Djokovic credited Soon-woo for putting up a spirited performance. He said, “All credit to him for playing some really high-quality tennis.” Djokovic looked rusty probably because he played only one match as a warm-up for Wimbledon.

Moreover, he said, “I didn’t have any lead-up tournaments prior to this so I was always going to feel less comfortable than I’d like to, especially against a player who hits it as cleanly as he does.” After the first-round scare, Djokovic will try to be sharper in the upcoming matches.