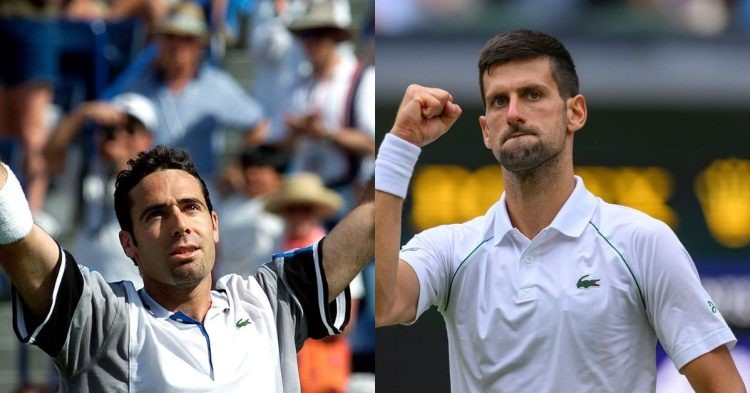 Former tennis player Alex Corretja has played enough tennis to understand that Novak Djokovic is much more than an extraordinary player. For someone who has been in two grand slam finals, Corretja understands the massive feat Djokovic achieved when he won his 7th Wimbledon this year.

Furthermore, he praised Djokovic and said, “I don’t even know how he can do that. The control of the emotions, how good you have to be as a tennis player, a human being, as a professional, the consistency.”

It was most likely Djokovic’s last grand slam of the year. He is not allowed to enter America for the US Open without getting vaccinated. Djokovic has been stubborn about not taking the vaccine. He missed the Australian Open this year due to the same reason.

The unvaccinated Novak Djokovic triumphs at Wimbledon. An immense champion, even in life. pic.twitter.com/jW8aBzDeGB

Even Corretja feels like Djokovic won’t be part of the last grand slam of the year unless the US government changes its policies for foreigners. He said, “But for the moment, we go into the US Open without knowing if Novak is going to be able to play. It looks like he is not going to be able to.”

Alex Corretja gives his take on the competition between Novak Djokovic, Rafael Nadal and Roger Federer

Novak Djokovic’s win marked an important moment in the history of tennis as he won his 21st grand slam to go one up against Federer’s 20 grand slams. However, he is one short of equalling Nadal’s record who currently stands at 22.

The debate for the greatest among the three has been going on for years. Federer is most likely to end his career at 20 grand slams considering he is 40 years old. On the other hand, there is still 3-4 years of tennis left in Djokovic and Nadal and we never know how many more grand slams they would win.

In the last 18 years, 63 out of 75 men’s singles Grand Slams have been won by Djokovic, Nadal and Federer.

Chiming in on the debate, Corretja said, “I cannot even believe it. We all thought Pete Sampras’ 14 Grand Slams were never going to be reached. They went over that with 20, and now, again, Novak is chasing Rafa. I think it is interesting while both are healthy; we are waiting for Roger, of course.”

As per Corretja, the competition between the three is good for tennis as fans always tune in for their rivalry. Furthermore, he said, “I think it is very interesting for the sport in general. It’s good that Novak keeps on winning because he is such a professional player.” With Djokovic not being part of the US Open, Nadal has a bigger chance of winning the US Open.