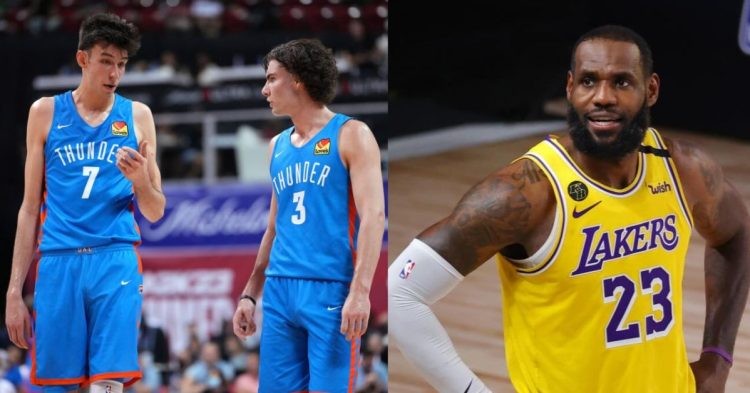 Chet Holmgren is one of the NBA rookies and was a hyped-up prospect many were excited to see play this season. He was drafted 2nd by the Oklahoma City Thunder behind Paolo Banchero. One of the largest points against him by NBA analysts was his extremely thin frame. People thought that would mean he is more susceptible to injury.

That is exactly what happened to Chet. Moreover, he was injured by LeBron James during a Pro-Am tournament conducted this NBA offseason. This type of event can easily demotivate a young athlete. We got reports that the young OKC star would be sitting out this season completely.

It must be very difficult to handle this setback and process it. At the end of the day, Chet is the only one who knows how he is feeling and what he is going through. He recently spoke about the process of his recovery and how he has been spending his time. Since injuries are growing increasingly common, we should want to know what Holmgren said.

No matter how we put it, this is still an unfortunate situation. We are sure LeBron didn’t mean to hurt Chet. However, that still ended up happening as it is a part of the game. Since Holmgren could not play alongside his teammates and needed to rehabilitate his foot, he kept himself engaged and occupied. He also discussed how this injury has changed his perspective on things.

“I’ve dedicated so much time to really hustling at my craft on the court. Now, this event is making me step back and kind of rework how I do things… And one of those ways is to become professional with watching film and speaking with coaches. Trying to learn, watch what’s happening, and really being engaged, in trying to get better with different avenues.

Chet summarized how he was spending his time, “ What I’m trying to do right now is just soak up all the knowledge of how things are done around here. How they’re going to be moving forward. So when I’m ready to get back in there, I can just kind of seamlessly plug myself in.”

We have to love the sense of optimism and mentality displayed by the young NBA rookie. However, it is very different watching the game from the sidelines and playing on the court. Theory can only get a person so far. Hopefully, Holmgren is able to make a speedy recovery to put his knowledge to the test.