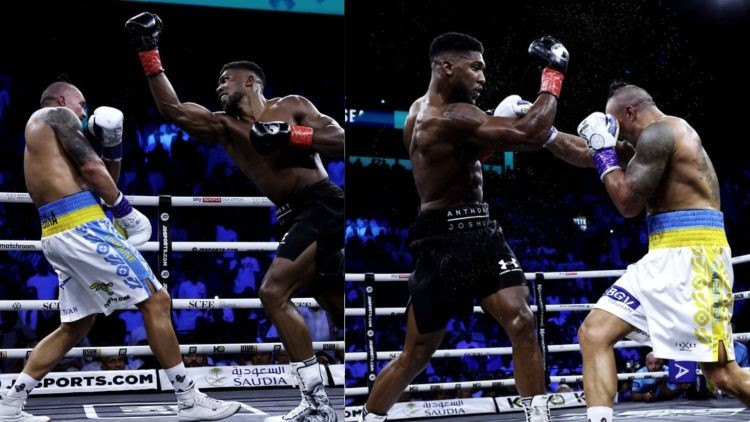 Oleksandr Usyk and Anthony Joshua once again shared the boxing ring in a rematch for the unified heavyweight titles in Jeddah, Saudi Arabia. The duo first fought in September of 2021 when Usyk picked up a comfortable unanimous decision win over the British boxer.

Fighting under the new coach Robert Garcia for the first time, Anthony Joshua came in with a ferociousness that was quite evident on his face. However, that wasn’t enough to stop Oleksandr Usyk who proved to be too much for Anthony Joshua yet again, picking up a split decision victory over the British boxer.

Joshua started the second round with a good body shot. The game plan looked quite evident for Joshua, targeting the body more than we saw him do in the first fight. Once again it was the up-jab that bothered Joshua on several occasions, but Joshua had the lead with ring-control and body shots.

Anthony Joshua showed great head movement in the third round, showing great rhythm and reaction to Usyk’s combinations. Both the boxers threw at will in the closing moments of the third round, with Joshua connecting a right hand, and Usyk landing a left hand right on the bell. Joshua also showed great intention to land that vicious uppercut.

To start the fourth round, Usyk landed a left, snapping Joshua’s neck back, but AJ jumped right back up with an up-jab. It goes without saying, Joshua looked a lot more aggressive and confident if we compare it to the first fight. Both the boxers looked like they got the strategies read out, showing more and more aggressiveness as the round progressed.

Going into the fifth round, Usyk showed more tenacity. A low blow from AJ halted the bout for a few seconds. Once again, Usyk looked difficult to hit, with Joshua looking for body shots and an uppercut. A beautiful straight left hand from Usyk, and yet again the needle moved towards Usyk’s side.

Round number six and Anthony Joshua looked a lot more like he did in the first fight. But AJ picked it up in the final moments, targeting the body and leading the dance near the ropes. Usyk connected a snapping right hook, with swelling on Joshua’s eye once again proving to be a sign of concern to the British fans.

Three straight left hands and Usyk took the seat as the aggressor. Round seven was all Usyk as he showed great movement, causing a moment of pause for Joshua who ate several counter punches.

Once again as seen in the last bout, the arena was washed off after both the boxers complained about slipping. Joshua landed some good body shots early in the round and followed it up with three punch combinations to the body making Usyk go for a clinch.

The elusiveness of Usyk once again caused trouble for Joshua to land those big punches. AJ also got a little reckless in the closing moments in his attempt to hit a knockout shot.

Another uppercut to the body from Joshua in the ninth round as Usyk looked a lot more compromised in the ninth. Joshua landed a pair of sweeping hooks, going to the body and using his left hand to great control. Usyk is on the run as Joshua went for the finish, picking up the body shots to great accuracy.

Arguably the most dominant round for Anthony Joshua against Oleksandr Usyk even including the first fight. Safe to say, the combination of punches to the body and the sustained attacks throughout the bout paid dividends in the ninth round.

Going into the tenth round, Usyk came more aggressive, with great speed and movement. Usyk landed a sneaky check hook, landing several big left hands. Goes without saying, a big reply from Usyk after a dominant round from Joshua.

A huge right hand from Joshua visibly rocked Usyk, but a below-the-belt shot meant the referee had to step in. Just when it seemed like Joshua was back, Usyk landed a vicious uppercut, using the jab and making great use of his footwork and combinations. As dominant as we called the last round in the favor of Joshua, it was as dominant this time around for Usyk.

A cracking right hook from Usyk to start the championship round as Joshua once again looked on the backfoot without any kind of answer to Usyk’s combinations. Joshua landed some incredible body shots but Usyk’s up-jab once again proved to be fatal for Joshua.

WE ENTER THE FINAL ROUND 🚨

A solid straight right hand from Joshua visibly shocked Usyk. A good answer from Usyk with a three-punch combination. A big left hand from Joshua, but Usyk followed it up with his own. A defiant round from Usyk as both the boxers willingly traded in the closing moments of the 12th and final round.

After everything was said and done, it was Oleksandr Usyk who picked up a split decision victory over Anthony Joshua to retain his heavyweight titles.