“One of the Scariest Fighters in the world”- Khamzat Chimaev Ragdolls Kevin Holland, Chokes Him Out With a D’arce in Round 1 at UFC 279 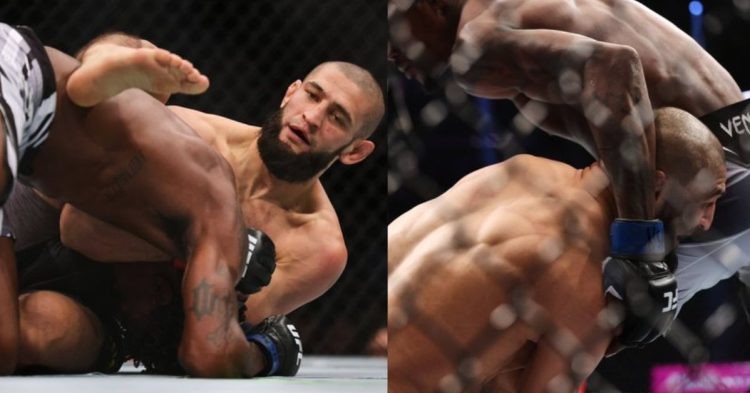 Khamzat Chimaev and Kevin Holland will square off in UFC 279’s co-main event after the main fight was cancelled. Nate Diaz was slated to face Chimaev in the main event, however, the fight had to be called off as Chimaev shockingly failed to make weight by 7.5 pounds.

Holland has been in an unbeatable position to win the whole 170-pound division. At welterweight, the 29-year-old is unranked, thus a fight with the #3-ranked Khamzat Chimaev at UFC 279 would fundamentally change the dynamics of the weight class.

Chimaev comes into this match with a 5-0 record in UFC competition, including 4 stoppages. In his most recent fight, Gilbert Burns, at UFC 273, he won by unanimous decision. His previous four victories were two by submission and two by KO/TKO.

Holland has won both of his most recent fights, most recently submitting Tim Means in the second round in June. Eight of his past 11 fights have been decided within the allotted time. Although Holland has a chance to advance in the division, his stylistic bout against the Swede in the ring might rank among his worst ever. But one shouldn’t rule him out.

Nothing is predictable in this sport. Given the strength he possesses in his shots, it is extremely likely that we will witness an upset. One can only watch the cards play out while relaxing and taking in the spectacle. So how did it play out? Let’s find out.

Chimaev fires as soon as the bell rings. Waiting no time, he sprints his way to a level change and then a takedown.

Holland is spiked to the ground, but he gets back up right away. He attempts his best to his Khamzat’s off him but all efforts in vain. While Khamzat drags him down once more while riding on his back. Holland turns in order to fully guard. Chimaev throws a few blows.

Holland looked around but couldn’t find a triangle. Dutch up. Drop down. Up and down For a D’Arce, Chimaev rolls back. The defence of Holland. He modifies. Chimaev keeps it even though Holland floats over. The pressure becomes too much for holland and he taps.

DOMINATION FROM THE SECONDS INTO THE FIGHT 😱 #UFC279 pic.twitter.com/LAnAhymZGq

Here are few Twitter reactions on a incredible victory for Khamzat Chimaev:

Khamzat Chimaev has absorbed ONE significant strike in his UFC career COMBINED outside the Gilbert Burns fight. That's ridiculous! A dominant wrestler who is committed to wrestling is a DANGEROUS recipe in this sport #UFC279

Khamzat Chimaev has turned himself into the biggest villain in the sport and that is a good thing. The hype will be huge when he fights for a world title #UFC279

One of the scariest fighters in the world @KChimaev leaves the T-Mobile Arena after obliterating Kevin Holland at #UFC279 #Chimaev pic.twitter.com/39kLiCdeH1

“If I Die, I Die in the Cage”- Khamzat Chimaev Responds to Criticism After Missing Weight, Calls Himself the Most Dangerous Fighter in UFC After Finishing Kevin Holland at UFC 279