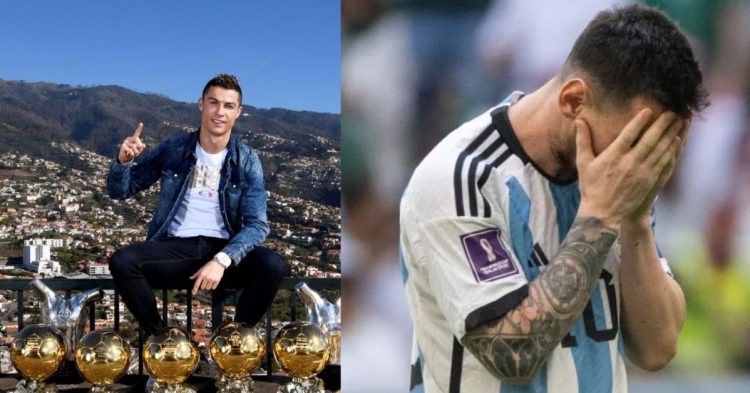 Cristiano Ronaldo is one of the greatest soccer players of all time (Credits: Twitter)

As reported by ESPN, Cristiano Ronaldo became the highest-paid soccer player in history after agreeing to a contract with Saudi Pro League side Al-Nassr.

Ronaldo agreed to two and half a year contract with Al-Nassr, through which he is going to earn $75 million per year as wages alongside commercials and endorsements.

This is not the first time Ronaldo became the most expensive player in the world. Back in 2009, the Portuguese transferred to Real Madrid from Manchester United at a staggering transfer fee of $94 million which in today’s time is equivalent to $130 million approx.

After achieving such an achievement Cristiano went a bit sneaky and stated “I’m worth $96 million, others are worth zero”, a comment that not only showed Cristiano’s arrogant side but also a taunt directed towards his fellow rival, Lionel Messi.

Although Messi’s name wasn’t mentioned by Ronaldo himself, the word “others” were considered to be players like Fernando Torres, Kaka, and especially Messi who at that time were contenders for the best player alongside him.

Ronaldo was worth all the cash Madrid spent on him. With a record of 450 goals in 438 matches and 5 UCLs Ronaldo is arguably Real Madrid’s greatest player of all time.

July 2009: “I’m happy to be the most expensive player in the world. I worth 96M, others worth 0€, perhaps. The price that was payed for me shows the difference”. pic.twitter.com/XHzXZCIaUG

Ronaldo’s record-breaking transfer not only brought Madrid’s glory days back but also made the Ronaldo-Messi rivalry more intense as the players represented arch-rivals Real Madrid and Barcelona, letting the individuals as frequent opponents, till Ronaldo left Madrid in 2018.

Cristiano Ronaldo becomes the most expensive player in the world again

Although this time there wasn’t any transfer fee involved nor was Ronaldo‘s market value at its peak, Ronaldo was able to pull the most expensive contract in soccer history.

A staggering $75 million per year deal in terms of wages. As per various media sources, the total worth of the deal is around $200 million making Ronaldo the richest player in soccer history.

After a no-holds-barred interview with Piers Morgan, Ronaldo terminated his Manchester United contract mutually, leaving him unemployed for some time until he found Al-Nassr.

Ronaldo’s Al-Nassr deal goes beyond the pitch, however, the contract clause allows Ronaldo to be one of the ambassadors for Saudi Arabia’s bid to host the 2030 FIFA World Cup.