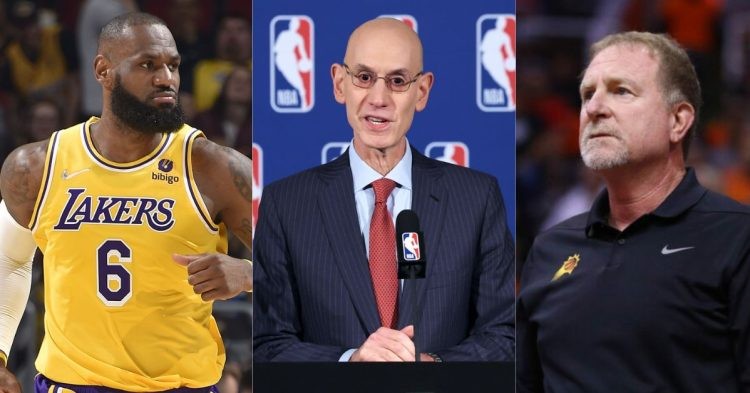 With just over a month left for the 2022-23 NBA season to begin, it seems like it is taking a huge turn. As we all know, the NBA pay attention to every minor thing that goes on in the league. And when it comes to racism, they do not let the accused get off that easily.

Recently, Phoenix Suns and Phoenix Mercury owner, Robert Sarver, received a fine and suspension from the NBA. Many may not know the real reason, since the investigation was under wraps for a while. According to many reports, Sarver used racist, sexist and sexual remarks against his employees on multiple occasions.

The NBA suspended him for one year. In addition to that, Robert also has to pay $10 million. “The NBA will donate these funds to organisations that are committed to addressing race and gender-based issues in and outside the workplace”, an official NBA statement said.

The league has many players who are vocal about their opinions. We all know Los Angeles Lakers superstar LeBron James is one of them. He called out the NBA a few hours ago, mentioning that he was disappointing.

The 37-year-old said, “Read through the Sarver stories a few times now. I gotta be honest…Our league definitely got this wrong. I don’t need to explain why. Y’all read the stories and decide for yourself. I said it before and I’m gonna say it again, there is no place in this league for that kind of behavior.”

Should the NBA have been more harsh in punishing Robert Sarver?

“I love this league and I deeply respect our leadership. But this isn’t right. There is no place for misogyny, sexism, and racism in any work place. Don’t matter if you own the team or play for the team. We hold our league up as an example of our values and this aint it,” LeBron also tweeted.

Read through the Sarver stories a few times now. I gotta be honest…Our league definitely got this wrong. I don’t need to explain why. Y’all read the stories and decide for yourself. I said it before and I’m gonna say it again, there is no place in this league for that kind of

According to the NBA, Sarver has used the N-word at least five times on different occasions. If that wasn’t bad enough, he has used sexual remarks against females and has also treated his employees badly. Now, the NBA Constitution permits $10 million as the maximum amount of penalty. However, the NBA could have done better than the suspension.

LeBron may think that Sarver should have been removed as owner. However, NBA commissioner Adam Silver has openly ruled that out. Almost a decade ago, the NBA removed Donald Sterling as the LA Clippers owner for the same reason.

In a statement, when comparing Robert’s situation with Donald Sterling’s, he said, “And ultimately, we made a judgment, I made a judgment that in the circumstances in which he had used that language and that behavior while, as I said it was indefensible, it’s not strong enough. It’s beyond the pale in every possible way to use language and behave that way but that was wholly of a different content than what we saw in that earlier case.”

It seems like LeBron will still be disappointed with Adam Silver and the league after all. The evidence against Robert Sarver does not seem like it will be enough for The Association to remove him as owner. Their actions may cause more players to come out and voice their opinions in the coming days.